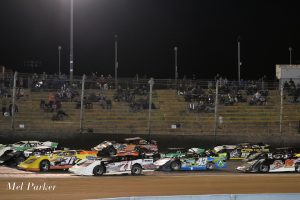 The Late Model action across season 2019/20 has already been sensational, but that is sure to all pale in comparison to this Saturday night field with a mouth watering thirty one Late Models nominated for the annual John Day event.

This Saturday nights event, doubling as Round Seven of the Carbusters Pro Dirt Late Model Series, will pay tribute to ‘The General’ John Day, a man that all of the local and visiting drivers (yes we even have some visiting interstate drivers in the field this weekend!) hold in great esteem and they will be doing the best they can to honour him.

As already mentioned, there are a huge thirty one nominations for this event, with the current Australian Champion, two former Australian Champions and multiple Aussie Title podium getters, multiple WA Champion winners, returning veterans and some new names in the field, this show is simply going to be the biggest of the season.

Paul Stubber claimed the win in the last show in dominant fashion, winning all the races he started to put the opposition on notice. He will be looking to do the same again tonight but will of course be chased hard by a plethora of drivers.

Michael Holmes currently leads the Perth Motorplex Track Championship and the Carbusters Pro Dirt Series points so he will be looking to grab another win and extend his lead this weekend in a race that he came second in this time last year.

Jay Cardy was third in ‘The General’s’ race last year and would love to get back on the podium again and improve on his fifth place in the series standings while Warren Oldfield and Marc Giancola hold down second and third overall respectively and will look to add to their already impressive Perth Motorplex wins resume.

Brad Blake knew John Day for a long time, holding him in high regard and he will be desperate to win in his honour, but he too is sure to be challenged by a couple of unexpected appearances by some of his old sparring partners.

One of those is Craig Vosbergen, who hasn’t been in the seat much in recent years, his last Motorplex event back in March of 2018. That being said, every time he makes an appearance, he is right on the pace and some practice laps on a Wednesday night a few weeks ago certainly whet his appetite and he will be a tough one to beat with son Brent, the current WA Champion, working behind the scenes to give him the best possible chance 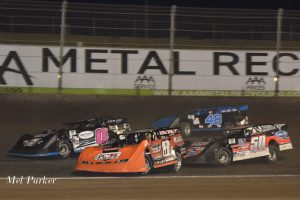 Veteran racer Ben Ludlow is also slated to return to the track this weekend aboard his son Ryans #29 machine. Again, not having cut many laps in a Late Model in recent seasons, Ben has had some good results in other divisions and with eleven Motorplex feature wins in Late Models, certainly knows what it takes to be up the front.

Adding some more spice to this weekend is the addition of two interstate drivers, Wade Carter and Bruce McKenzie. Both have raced at the Motorplex in the past, but it has been a while between visits so after getting themselves reacquainted, should be ready to go ahead of the Australian Late Model Championship to be held at the same venue, the Perth Motorplex, on the 8th and 11th of January next year.

Joe Chalmers has his engine back in the car after damaging it earlier in the season so he should be ready to go, while Kye Blight is in a similar boat, ‘The Highlight’ ready to put on a show for the fans once again. Ken Macpherson has also nominated to be back in the field after grabbing a podium finish in the season opener before selling his car and missing the next few rounds.

The Late Models have been putting on a great show at every meeting so far this year and with one of the biggest fields we have seen in a number of years, are sure to continue that this weekend!