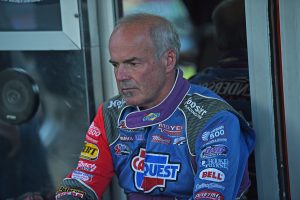 Those in Late Models would well know what Moyer has achieved in his forty plus year career, but for those not in the know, it is time to see what has lifted this man into legendary status as part of the Dirt Late Model Hall of Fame.

The Batesville, Arkansas domiciled driver was born in Knoxville, and began racing in 1977. Now, some 41 years later, he is a grandfather but still racing and definitely more than able to compete at the top level with all of the young guns, still winning races and adding to his feature race tally which currently stands at 835 wins!

Possibly the most well-known Late Model race in the World is the ‘World 100’, held annually at the famous Eldora Speedway in Ohio. The competition is fierce each and every year, attracting the best of the best and Moyer has made his way to victory in the ‘Granddaddy of them All’ no less than six times, in 1991, 1993, 1994, 1998, 2000, and 2010. This is more than anyone else has won this prestigious race and doing it across a span of two decades is even more impressive!

On top of this, he is also a six-time winner of both the DIRTcar Summer Nationals and the I-55 UMP Nationals, has accumulated 100 victories on the grueling series dubbed “The Hell Tour” and grabbed multiple wins in the World of Outlaws Late Model Series, the Dirt Late Model Dream and the Topless 100, as well as a single win in the Late Model Nationals, not to mention countless other wins and awards.

More recently Moyer has competed in some big events to close out his 2018 campaign in the States. His Knoxville Nationals campaign didn’t quite go to plan, being credited as twenty first in the A Main after pulling off, but he then grabbed two podium finishes in two nights at Magnolia Motor Speedway in Columbus, Mississippi and then grabbed his ninth feature of the 2018 season at Lake Cumberland Speedway in Kentucky, the 835th of his career.

It is for this reason, all of these amazing career statistics, that Billy Moyer coming to Western Australia to compete is a very, very big deal.

Moyer is sure to add some spice to an already amazing series and in what makes it even more special is that it is his first ever trip down under! He will certainly be keen to add to his career win tally and in another country at the same time!

Moyer, as part of the Paul and Alice Stubber team, will join a number of other Americans and all the other local stars to compete in the four nights of the Di Candilo Steel City Late Model Invasion Tour (including the two night Late Model Nationals) at the Perth Motorplex on Wednesday the 9th of January and Saturday the 12th of January, followed by round three at the Make Smoking History Collie Speedway the Friday after (18th of January), with the final round at the Make Smoking History Bunbury Speedway the following night, Saturday the 19th of January.

Stay tuned for further details on Moyer, his fellow Americans and all the Invasion Tour happenings in coming weeks! 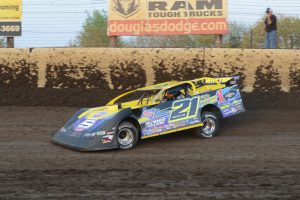