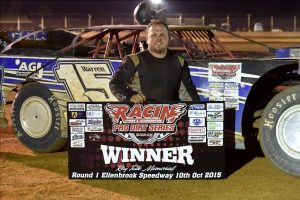 It has been a huge season for the Late Models this year, with the National Title bringing a number of extra drivers out to compete in events that have seen the division put on some of the best racing seen in its history.

A total of fifty two drivers have competed this season at the Perth Motorplex (with twenty three competing in the Bunbury Track Championship and forty three drivers competing in the RACIN’ Tyres and Accessories Pro Dirt Series).

The season began way back in October at Ellenbrook Speedway, where Warren Oldfield made it three Ray Tulk Memorials in a row and started off his season in the best possible way as he claimed the feature win from Jay Cardy and Kye Blight.

Next up was the Perth Motorplex Grand Opening Showdown, doubling as round two of the RACIN’ Tyres and Accessories Pro Dirt Series, where brother Jamie Oldfield claimed his first win of the season as he defeated Warren and Marc Giancola. The Late Models returned to the Motorplex a short time later for the Magic Man 34 event, where Warren Oldfield was back in the winner’s circle as he defeated Jay Cardy who fought hard to defeat Jamie Oldfield.

Bunbury would be the venue for the first time this season for round four of the Pro Dirt Series, where Michael Holmes outlasted on track drama and circling thunderstorms to claim the win from Paul Joss and Jay Cardy.

The country track tour would continue for the next two rounds, with Jamie Oldfield grabbed his second feature win for the year at Collie Speedway, leading every lap of the feature and defeating Kodee Brown and Kye Blight, while the following round at Kalgoorlie saw Kye Blight claim his first ever Late Model feature ahead of Warren Oldfield and Jay Cardy.

The next two shows would be back at the Perth Motorplex, with both Warren and Jamie claiming another feature win each, while weather and other events would see a slight reshuffling of the calendar after these shows, leaving the next events to be the Australian Title and the WA Title respectively.

It was a massive two weekends of racing for both the Australian and West Australian Titles, with Kodee Brown racing his way to victory in both main events. Michael Holmes and Darren Kane both claimed the opening night features of the Australian Title, while Brown defeated a hard charging Ryan Halliday and Kye Blight in the final. Brown then defeated Paul Stubber and Ben Nicastri in the WA Title final at Albany.

Esperance Speedway held an event the day after Albany, with Paul Stubber claiming his maiden Late Model feature victory ahead of Brad Blake and Ben Nicastri, while Marc Giancola claimed the feature win at Bunbury on the second night of the Krikke Boys Shootout ahead of Blake and Kye Blight.

The Late Models went topless for one night only at the Perth Motorplex in the next event, with Jamie Oldfield claiming another feature victory ahead of Warren, with Kye Blight in third. The next event would be at Bunbury for the final time this season, where Brad Blake finally broke through to claim his first win of the season ahead of youngster Brent Vosbergen and Warren Oldfield.

The final two events of the season would be held at the Perth Motorplex, with Warren and Jamie both adding another win to their tally. Jay Cardy would finish on the podium at both events, while Brad Blake and Marc Giancola would appear on one podium each.

If we now look at the three series contested across the season, we can see similar drivers have come home in the top positions. The RACIN’ Tyres and Accessories Pro Dirt Series was held across twelve rounds, with forty three drivers competing, but in the end it was Warren Oldfield who claimed the win on 1296 points, 79 points ahead of Jay Cardy on 1217, while Jamie Oldfield held onto third with 1201 points.

The Perth Motorplex Track Championship saw a massive fifty two drivers compete, with Warren Oldfield again claiming the win on 1310 points ahead of Jay Cardy on 1240 and Michael Holmes on 1232, while it was Marc Giancola who claimed the Bunbury Speedway Track Championship on 316 points ahead of Kye Blight on 308 and Jay Cardy on 299, the top seven drivers separated by just thirty one points.

Looking at the stats of the season (further details below), we can see that of the seventeen feature races conducted, Jamie Oldfield claimed five wins, while brother Warren had four feature victories, with Kodee Brown and Michael Holmes each garnering two: Brown’s wins being the two most important title races of the season! A total of nine drivers claimed feature wins throughout the season.

Breaking down the stats a little more, we can see that fourteen drivers appeared on the podium throughout the season, Warren Oldfield leading the pack with ten appearance. He is followed by Jay Cardy, Jamie Oldfield and Kye Blight who had seven podium appearances apiece.

In heat racing action, there are seventeen drivers who claimed a win across the sixty nine heats contested across the season. Jamie Oldfield is the man who comes out on top with a total of fifteen heat victories, while Jay Cardy has nine, followed by Marc Giancola who crossed the line first on seven occasions.

More awards and stats will be announced after the trophy night, which is coming up this weekend, Saturday the 14th of May. A full release to be done the following day once all the award winners have received their trophies!