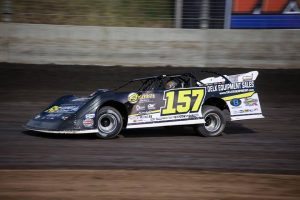 The last few meetings for Late Models have seen the titans clash in hard fought battles each and every single race and this Saturday night, back at the Perth Motorplex for Round Four of the Sims Metal Management Pro Dirt Series, the war will resume, with twenty one combatants nominated.

As always, the field is full to the brim with quality and any number of drivers could potentially be on the podium come the end of the feature race on Saturday night.

Ryan Halliday is the only driver in the field to have tasted feature race success so far this season with opening round winner Jamie Oldfield running another division on Saturday, while last start winner Kye Blight will be sitting out of this weekend’s event to attend his brother’s wedding. This leaves Halliday as the only one with the chance to become a multiple feature race winner so far in 2018/19 this weekend and after his recent performances, can certainly not be counted out. Halliday in fact was leading the last show until battery issues forced him infield and after spending the last fortnight going over the car with a fine tooth comb, will be hopeful of another strong result.

Paul Stubber, Marc Giancola and Brad Blake have all been impressive in recent weeks and will also be keen to perform strongly in this weekend’s event. Blake, who currently shares the overall Sims Metal Management Pro Dirt Series points lead with Blight will look to break away and take the lead all for himself, while Stubber and Giancola can be expected to once again pick up their developing rivalry, with a different chapter already being written in every round so far this season. Stubber incidentally will also be running a crate motor for this meeting, recently stating he would be thrilled with a top five finish against the open motors.

Other crate motors in the field doing well so far this season include Veronica McCann, Ken Macpherson, Daniel Ameduri and Mick Comley, who all sit just behind the open motored cars of Jay Cardy and Michael Holmes in the top ten of the overall points. All six drivers have nominated for this weekend’s event and should be strong chances of boosting themselves up in the overall rankings.

Warren Oldfield makes his season debut this weekend, this time aboard his recently arrived ex Mike Marlar XR1 Rocket #157 machine. The equipment touched down in the last couple of weeks and after testing tonight at the Motorplex, Oldfield is keen to get back behind the wheel and really see what his new machinery can do against the best in the west.

Chris Pavlovich, David Nylander and Jai Mazzini have all also nominated for their first shows this season and shouldn’t take too long to be right back on the pace amongst a stack of other competitors.

So what will happen in the fourth battle of the Sims Metal Management Pro Dirt Series for season 2018/19? The best way to find out is to be at the Perth Motorplex this Saturday night!

Pictures: Warren Oldfield will debut a new car this weekend, while Paul Stubber will run a crate motor. Both drivers practiced tonight at the Perth Motorplex. Pics Courtesy Aidan Skraha. 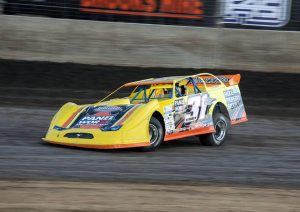