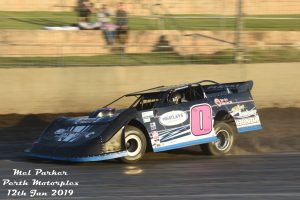 icking a winner at any Late Model show in Western Australia so far this season has been a tough task and the final event of the Di Candilo Steel City USA vs WA Invasion Tour will be no different.

A good field of twenty three cars have nominated for this Saturday night’s final event, to be held at the Make Smoking History Bunbury Speedway.

With the third chapter of this seasons series yet to be written, (round three will be held at Make Smoking History Collie Speedway on Friday night, the day before Bunbury), it is hard to say who will be sitting pretty coming into the final round and who will be fighting an uphill battle to grab the series win.

Coming into the third round though it is ‘Mr Smooth’ Billy Moyer who leads the series and despite again being on an unfamiliar track, he is determined to hold onto that points lead and grab the feature win and cement the overall series at Bunbury.

Don’t forget, the Moyer side panels from his car are currently up for auction via the Late Model Racing Western Australia Facebook page. Bidding closes at 9pm Saturday night, with the lucky winners able to take their panels home with them should they be at the track. Make sure you head to our Facebook page and find those two posts, one for a side panel with the big #21 on it, with the other for the rear panel with the American flag on it! All proceeds will be going to charity!

New Waverly, Texas driver, Tyler Erb is second in points after the opening two nights and will also be making his first visit to the Make Smoking History Bunbury Speedway. This time last year he won three of four features at unfamiliar tracks to claim the overall series tile and will be keen to go back to back this weekend.

Joe Godsey is currently third in the overall points after some strong runs, including a podium in the National feature race. He has raced at Collie previously but not at Bunbury, so will be hoping to adapt quickly in order to challenge for the win.

Michael Homes is the highest placed Western Australian after two rounds, courtesy of two strong podium finishes. He and his car have been a simply awesome combination so far and having won features at Bunbury previously knows what it takes, so could be one to watch on Saturday night.

Brent Vosbergen has been the surprise packet so far, currently sitting fifth overall after some strong performances saw him qualifying in the front of the field. Full of confidence, Vosbergen will now be keen to consolidate his position overall and challenge for podium finishes come feature time.

The top ten in points after two rounds is completed by Kye Blight, Ryan Halliday, Brad Blake, Jay Cardy and Jamie Oldfield. With Halliday the only one not competing across the weekend, the remaining four drivers will have their work cut out as they seek to move further up the overall point’s ladder. 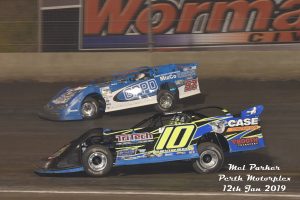 Additions to the twenty three car field for Bunbury from the previous night are Rob Wells and Jai Mazzini.

What better way is there to spend your Saturday night than by watching the final event of the DI Candilo Steel City USA vs WA Invasion Tour?! See you trackside! 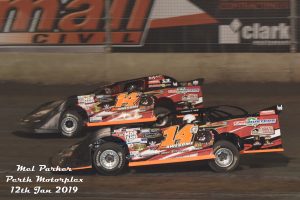