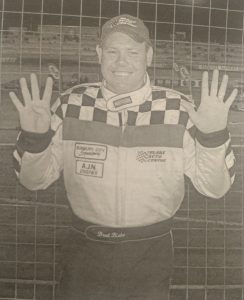 It has been a massive season so far for Late Models and it just gets bigger this weekend as a great field of drivers will fight it out for the right to wear the WA#1. That list will be released shortly, but for now it is time to look back over the last twenty three years of history to see exactly who has made the impact on the title stage.

The Perth Motorplex has almost been the home track for the division over the years and this year will mark the eighth time the event is held at the venue, the fifth year in a row. The event has previously been held as a Series four times, with Collie, Manjimup and Bunbury each holding the event three times, while Albany, Geraldton, Northam and Kalgoorlie have all also had a shot at hosting.

Last year saw Kye Blight finally breakthrough for his first career WA Title win as he lead home Warren Oldfield and Ryan Halliday, while the year previous, Brent Vosbergen harnessed the power of emotion after the passing of his Grandfather, the great Big Bad Bert Vosbergen. Vosbergen led home former Champions Marc Giancola and Warren Oldfield while the year prior the Late Models again returned to the high banks of the Perth Motorplex for their State Title with Paul Stubber besting more former champions in Warren Oldfield and Ryan Halliday. The season prior Jamie Oldfield led home brother Warren and Michael Holmes while back in the 2005/06 season it was Northern Territorian Chase Karpenko who claimed the win at the Motorplex venue while the first ever time the event was held at the Motorplex was in 2000/01 when Ryan Halliday took the win from Ben Ludlow and John Cardy. The only other time the title was held at the Motorplex was the following year as part of a three round, three track series.

The first time the WA Championship was actually held though was as a series in the 1997/98 season, taken out by Alan Nylander ahead of John Cardy and Ben Ludlow. It was held as a series for the first three years, followed by a stand-alone event at the Perth Motorplex in its opening season. It then returned to a series format for one year before settling on the stand-alone event that has been running ever since.

One of the great things about Late Models is the family connections and as previously noted, those connections follow through generations. Inaugural winner Alan Nylander has the family tradition continue through David and Matt racing, while John Cardy’s relative Jay is a regular competitor and has a significant chance this weekend after having featured on the podium on three other occasions in this race, despite not yet having found the top step.

The driver however who is most familiar with the WA Title podium is also in the field, with nine time champion Brad Blake looking for win number ten. Blake has also featured on the podium on three other occasions, meaning he has been in the top three twelve times out of the entire twenty two year history of the event. He would love to race back into form with a tenth WA Title win after a disappointing DNF last year, plus have the chance to add to his history making haul of Perth Motorplex feature race wins.

Two drivers have claimed the Title win twice, being Craig Vosbergen and Jamie Oldfield, the latter of which claimed his second success here at the Motorplex a couple of years ago. Vosbergen has three other podium finishes in this race while Oldfield has none, and with twenty one and twenty two Motorplex feature wins respectively, the duo always fights it out hard to finish on that step.

Other former WA champions, aside from those already mentioned, include two-time winner Ryan Halliday (also with seventeen Motorplex feature wins to his name), Scott McPherson, Marc Giancola, Kodee Brown, Warren Oldfield, Paul Stubber, Brent Vosbergen and defending champion Kye Blight. Halliday has five other podium finishes, Oldfield also has five (including the last four seasons in a row) and both will be hoping to add to that tally this weekend.

So who will etch their name into the history books this weekend? Be at the Perth Motorplex this Saturday night to find out!