Although it isn’t a Pro Dirt Series round, a number of the WA Late Model stars and their cars are coming out to play this Saturday at Allwest Plant Hire – Ellenbrook Speedway for the Ray Tulk Memorial and it could well be an omen for what lays ahead in a huge 2021/22 season!
A good field of fifteen cars have nominated for this Saturday afternoon showdown in what will be the 14th Annual Ray Tulk Memorial and with three former winners in the field, plus a whole host of other hungry drivers, this will be one for the history books.
Ray and his wife June were awarded Life Membership of the RDA of WA back in 1981 after having played a huge part of shifting the RDA from Wattle Grove Speedway to Ellenbrook. Ray was also one of the founding members of the Late Models, serving in a number of positions including as Treasurer and in Technical. Sadly Ray passed away in 2004 and a memorial race was named in his honour that year.
Coming into the show it is anyone’s guess who will be the standout after a long off season but the bookies will be hard pressed to go past defending Pro Dirt Series Champion and the defending Ray Tulk Memorial winner in Warren Oldfield (Oldfield Racing).
Another stellar season saw him net plenty of awards at the end of 2020/21 and Warren will be determined to start the same way he did last year and grab a sixth Ray Tulk Memorial win.
Brother Jamie Oldfield is back in a Late Model on a more regular basis this season and after cutting plenty of test laps in the off season will be ready to hit the go button straight away. He has already got three Ray Tulk Memorials to his name and will also be keen to close the gap on his brother.
Late Model legend ‘The 0 Show’ Brad Blake is the only other former winner in the field with two victories in the Ray Tulk Memorial race, his first in 2009, his most recent in 2017. Despite his longevity in the sport, Blake has proven he is still more than capable of taking the win and he would love to draw first blood this weekend and set the rest of the competition on notice for the season ahead.
Former National Champion Paul Stubber, nine-time former Pro Dirt Series placegetter Jay Cardy (Cardy Racing Components) and former Ellenbrook Speedway President Jason Oldfield are just three more big names in the field and each can lay their own claim to the crown, desperately trying to their speed and experience into a victory.
They will be joined by former Rookie of the Year Daniel ‘Nudge’ Ameduri (Ameduri Motorsports) who will be looking to use his home track advantage to record some strong results.
At the other end of the scale, there are also plenty of rookies in the field including Rod Musarra (Rod Musarra Racing #12) (who despite his rookie status has already claimed a number of wins since moving into the Late Models from his previous division), Damian Hudson (who claimed an epic heat win at the last show at Ellenbrook), Peter Mewett and Ritchie Freeman who both made their debuts during the winter season and will be testing themselves this weekend.
Also in the field is Kalgoorlie local Ray Leonard who, upon realizing he had no cars in the shed as he waits for his new machinery to be built, decided to have a go in Late Models as he was so desperate to get out and race! He is very experienced in speedway and could well be a surprise packet this weekend.
CTM Recruitment Racing teammates Rob and Richard Wells have also thrown their hats into the ring after some strong results in the Winter season and they will be hoping for strong results ahead of a big schedule while Peter Seaton recently made a welcome return to the seat and grabbed a podium finish, so he will be full of confidence going into this weekend. 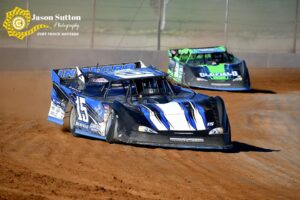