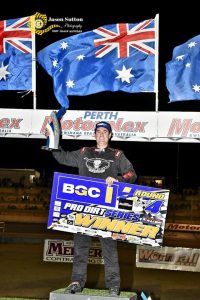 Ryan Halliday has tonight returned to racing for the first time this season in the best possible fashion, scoring a heat win, pole position in the feature and then taking out the thirty lap feature event to once again be the King of Kwinana!

Halliday started the King of Kwinana feature race (doubling as the third round of the BGC Pro Dirt Series) from pole position with fellow veteran racer Brad Blake, who also scored a win and a third in his heats to tie on points with Halliday, alongside him.

As the race went green, Halliday jumped to the lead hotly pursued by Australian Champion Kye Blight, who was finally getting some laps under his belt in season 2020/21. Unfortunately it was all for nought as Matt Nylander spun in turn one to bring on the yellows without a lap being completed.

Halliday again led away at the second attempt, with Blight being pressured by Blake, Blake eventually grabbing second on lap two. As the lap was completed a number of cars came together, Laura Byrnes and Willy Powell left stranded in turn four.

It is worth noting that at this point, Warren Oldfield was in ninth after starting from the rear of the field in a borrowed car. Oldfield was a runaway leader in heat three until his car dramatically slowed down the back straight, but his lead was such that he still rolled over the line in seventh place in that race. Unable to use his own car, Warren then stepped into brother Jamie’s car and started from the rear in the feature event.

On the restart Blight went high and right around the lead duo, but Halliday and Blake fought back to move back into the top two.

The duo went side by side as Blight found some more speed and went for the lead but just couldn’t get by, all of a sudden Blake grabbing the lead from Halliday!

David Nylander then found himself stuck on the wall to bring out the yellows with five laps complete.

From here, it all went haywire over the next few laps, with Ameduri and Stubber making contact that saw Stubber retire, Michael Holmes going up in a plume of smoke and heading infield, Ameduri following him out of the race, Kye Blight suddenly slowing and parking his machine on the inside of turn two and then finally Matt Amato losing a wheel going down the back straight!

The restart would see Brown get the better of Macpherson, with Oldfield and Moon fighting it out for fifth.

Oldfield finally got by Moon with nine to go, then passed Macpherson a lap later to be fourth before a slight mistake saw Macpherson get back by.

Up front Blake closed on Halliday again and with five to go it was only a small margin separating them, while there was now a big battle also for third between Brown, Macpherson and Oldfield, Oldfield grabbing fourth with just two laps to go.

Back up front though it was all Halliday, claiming his sixteenth career win at the Motorplex and crossing the line ahead of Blake, Brown, Oldfield and Macpherson. Cardy, Moon, McCann, Powell and Byrnes would round out the only other finishers.

There is now a fortnight break for the Late Models before they again return to the high banks of the Perth Motorplex for the John Day Classic event on the 5th of December, which will double as Round Four of the BGC Pro Dirt Series. 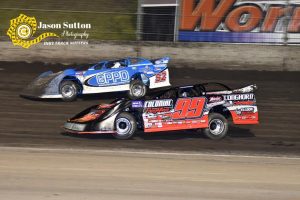