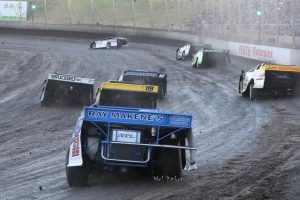 Traditionally the festive season and New Year are the busiest time of the year for Late Models with the now traditional invasion tour, and despite the impact of COVID cancelling that part of the season, we will still be running some huge shows as part of the three night Late Model Nationals!

It all begins this weekend at the Allwest Plant Hire - Ellenbrook Speedway with the opening round of the Late Model Nationals, doubling as the sixth round of the BGC Late Model Pro Dirt Series, and we have an excellent twenty three car field nominated for the show.

The Late Models last visit to Ellenbrook was back in October when Warren Oldfield (Oldfield Racing) raced his way to victory in what was the annual Ray Tulk Memorial and as the current series points leader he will be keen to grab another win and extend his points lead. He comes into this weekend fresh off yet another podium finish on Boxing Day and should be a real contender once again come feature time on Saturday.

On that same October occasion, Brent Vosbergen (Team Vosbergen Racing - TVR) and Ken Macpherson (KMM - Ken Macpherson Motorsport) followed him home in the feature and while Vosbergen comes into the show in good form after a solid second place at the last show after returning to his familiar #4 machine, Macpherson had a slightly different end to his night. Despite qualifying on the front row on his first night in a brand new car, Kenny Mac ended up on his lid and has a lot of work to do to get back on track this Saturday.

One man who doesn’t have a heap of work ahead of him to be ready for the event is Australian Champion Kye Blight (Kye Blight Racing) who grabbed the win at the last show. A run of horror engine issues have seen him record less than desirable results so far this season, including at Ellenbrook earlier in the year, so he is certainly out for retribution and will be a tough nut to crack this weekend.

Brad Blake currently holds down second place in the overall BGC series and is definitely not going to settle for that position. Blake knows what it takes to claim victory at Ellenbrook and is in with a real shot at closing that points gap on Oldfield.

We welcome back former Australian Champion Kodee Brown (McCorry Brown Racing Team) into the field this weekend and it has been a number of years since he has been seen at the northern suburbs venue so will be exciting to watch, while on the opposite end of the scale, Michael Holmes (Michael Holmes Racing) has done plenty of laps around Ellenbrook recently and jumping back into the #20 Jock Murray owned machine this weekend puts him in a very familiar position coming into the show.

Jay Cardy (Cardy Racing Components) is hoping to have a change of luck after being involved in a crash last show, as is Paul Stubber, while Ryan Ludlow (Ludlow Racing) has also got a lot of work ahead of him if he is to make this weekend after he too was involved in a wreck at the same meeting.

Joe Chalmers (Team BCM Motorsport:) had mechanical issues in the heats at the last show but rectified those in the feature to storm through the field and finish fourth and claim the Hard Charger Award so he will be keen to start closer to the front this time out and see what happens, while David Nylander (Nylander Motorsport) recorded a top five finish at the last show and would love to continue that run.

He will be joined by brother Matt, who has done plenty of laps around the Ellenbrook venue, as well as Veronica McCann (Veronica McCann - Red Hot Racing) who has also tasted feature race success in the Development Series at Ellenbrook and would love to repeat those efforts against the big names of the Pro Dirt Series.

Also in the field is a whole heap of local drivers looking to make a name for themselves in front of their home crowd including Daniel Ameduri (Ameduri Motorsports) and Jason Oldfield (Oldfield Racing) as well as Bunbury based Jamie Moon and the quiet achiever Jayden Meckenstock (Meckenstock Motorsport).

Rob and Rhys Wells (CTM Recruitment Racing) also rejoin the Pro Dirt field again this weekend and will be looking for some solid results after spending time getting motor issues sorted, while rookies Nathan Richards and Laura Byrnes (Red Shamrock Racing) will be joined by the returning veteran Willy Powell in the field, all three looking for a good result.

It is a crack twenty three car field set for this Saturday, so make sure you are trackside for the Summer Slam, with on track action beginning from 2.45pm. 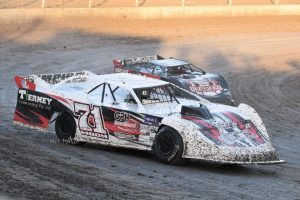