Such an exciting season cannot be recapped in just one release, so today we pick it up with Round Seven of the 2018/19 Sims Metal Management Pro Dirt Series.

Round seven of the series was again at the Perth Motorplex with twenty two cars in the pits, including American visitors Joe Godsey and Jeff Roth who headed down under early, prior to the Di Candilo Steel City Late Model Invasion Tour.

Brent Vosbergen, Marc Giancola, Kye Blight and Brad Blake claimed the four heat wins with Marc Giancola the man who was to start on pole. Unfortunately due to a crash in another division that saw a portion of the fence torn down, the feature race was cancelled for the night, to be rescheduled at a later date. 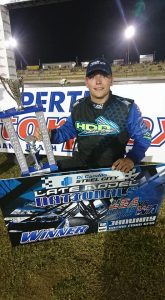 The next show would see the Sims Metal Series take a break as the American invaders arrived for the four rounds of the USA vs WA Invasion Tour, again proudly presented by Di Candilo Steel City. The opening night would be held on a Wednesday, the mid week show attracting twenty eight cars and doubling as night one of the Late Model Nationals also. Joe Godsey set a new one lap track record in qualifying and would then finish first and second in his two heats to start on pole position, while fellow countryman Billy Moyer also went under the old record to come second in qualifying, then won a heat and was fourth in the other. Brent Vosbergen also impressed, doing enough to start on the front row alongside Godsey.

After an initial pileup at the start, Moyer was able to get into the led and was never headed, grabbing his 836th career win from Godsey while Michael Holmes was an impressive third.

The second night of the Nationals was held on the Saturday night, with Godsey again coming from the front row and battling with Moyer for the lead. Godsey managed to race away to a nearly five second lead but a restart brought him back to the field and this would be when Tyler Erb made his move, grabbing the lead and able to hold on to take the win from Moyer and Holmes in what was a great finish.

A week later nineteen teams headed down the highway to compete in round three of the Di Candilo Steel City USA vs WA Invasion Tour at the Make Smoking History Collie Speedway.

Kye Blight was the fastest car in qualifying while heat wins were shared by Blight, Paul Stubber, Moyer, Erb, Holmes and Chris Pavlovich. This would see Erb coming from pole position in the forty lap feature, but a number of restarts in the opening four laps of the race would eliminate a number of drivers. This would be followed by the final thirty six laps running non stop, Erb going on to win ahead of Jamie Oldfield and Holmes who grabbed his third successive third place in Invasion Tour feature races. 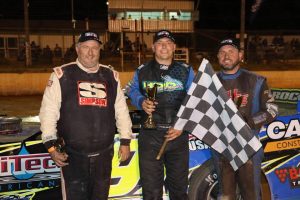 The final night of the Invasion tour would see teams head the short distance down to Make Smoking History Bunbury Speedway, with Joe Godsey again topping the sheets in qualifying before grabbing a heat win, joined by Moyer, Holmes and Erb as victors in the preliminaries.

Erb would be the one to grab the lead, but Moyer held his cool and chased him down, going on to claim his 837th career feature win over Erb and Brad Blake.

Once the points were all tallied, it was Tyler Erb who had just a six point advantage on Erb, both having claimed two wins, a second and a fifth in feature races, and the difference split by points gained in heat races, such was the tightness of the battle. Michael Holmes was third overall with Jamie Oldfield and Brad Blake rounding out the top five finishers in the overall Di Candilo Steel City USA vs WA Invasion Tour.

This would bring racing in Western Australia to a short hiatus to allow for drivers to travel east for the National Title.

Stay tuned for the final Part of the season recap tomorrow!