In what was just his first race of the season, and driving a brand new engine and chassis package, Kye Blight has 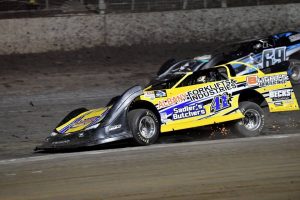 stormed his way to victory tonight at the Perth Motorplex, leading every circulation of the thirty lap feature to claim round seven of the XLI Pro Dirt Series.

Courtesy of a win and a second place finish in his heats, Blight would start alongside Paul Stubber, who achieved the same feat, on the front row of the feature and as the race went green Blight would quickly get the jump and race into the lead.

Unfortunately for Blight it all amounted to naught as a whole pile of cars came together on the back straight, including Jay Cardy, Veronica McCann, Chris Pavlovich, Ken Melvin, Jason Bond and Brad Blake who were all inconvenienced. Luckily all cars were able to get going again and take the green at the second attempt at a start.

This start too would be short lived as Daniel Ameduri found himself spinning in turn three to bring about a third attempt at getting the race underway.

Blight would make it three from three as he again grabbed the lead with Ryan Halliday again using the low line to move into second. Warren Oldfield would move through to third while Stubber dropped to fourth using the highline.

The front of the field spread out slightly but at the back of the pack was an intense battle between ten cars for positions fifteen to twenty four, a battle upon which Blight would close in on just a few laps later.

Blight, driving his new Longhorn machine was able to place his car wherever he wanted and pulled away through traffic, with a lead that was shortly reduced to nothing once again after Jayden Meckenstock came to a stop in turn two to bring out the yellows with eight laps complete.

Stubber, American visitor Joe Godsey and Craig Vosbergen would fight hard for third on the restart, with each taking a turn leading the trio’s battle before Vosbergen grabbed the position. Jay Cardy would shortly after arrive on the scene and take away fourth position.

By lap twelve Blight had made his way back into lapped traffic, with the yellows coming out for laps later, this time for Jamie Oldfield, whose race had come to an end on the back straight and would end up with others already on the infield including brother Warren Oldfield and American Joe Godsey who clouted the wall and suffered damage to a spoiler.

Blight again lead away the field at the ensuing restart, ahead of Halliday, Vosbergen and Cardy who were able to break away from the rest of the field. Cardy, coming on strong as the race continued, caught Vosbergen and used the highline to move alongside him on the low line and grab third on lap twenty but Vosbergen fought back and reclaimed the position a lap later.

Up ahead, Blight was again stuck in heavy traffic which this time allowed Halliday to catch him ever so slightly, and in turn Vosbergen closed on Halliday as the laps wound down.

Just as it looked like the race would run through to the end, Willy Powell found himself facing the wrong way in turn four to bring out the yellows one final time and set up a three lap restart. 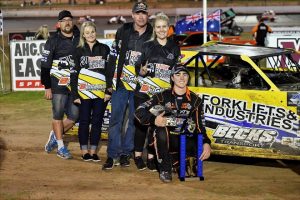 Blight went high, Halliday went low, Vosbergen followed Halliday, Cardy, Holmes and Stubber made moves for fifth place and Brad Blake charged from the rear to be right in contention in a frenetic final three laps, but in the end it was all Blight, claiming his second career Perth Motorplex feature win, his first in a Late Model at the venue (and second Late Model feature win overall), defeating Ryan Halliday who crossed the line just 0.087 seconds ahead of third place Craig Vosbergen. Jay Cardy and Paul Stubber would round out the top five.

Now the Late Models have the New Year period to regroup before the big guns come out to play, with five American visitors set to take on the best from the West in the Di Candilo Steel City USA Invasion tour, kicking off at the Perth Motorplex over two nights, Saturday, the 13th and Sunday the 14th of January, for the Late Model Nationals, before heading to QUIT Collie Speedway and Albany Speedway the following Friday and Saturday nights respectively.

These are shows not to be missed, so have a Happy New Year and we will see you trackside for the ground pounding Late Models early next year!