Once again the Late Models lead the way in nominations for this Saturday night’s event, with an almost identical list of nominations slated to appear.

As he did last week, Brad Blake comes in as the XLI Pro Dirt Series leader, courtesy of winning the opening round at Ellenbrook Speedway a few weeks back and then backing it up with a strong fourth place finish last weekend. Jay Cardy though is just one point behind after two podium finishes, while Warren Oldfield is another five points behind after he too claimed two podiums from the opening two rounds. 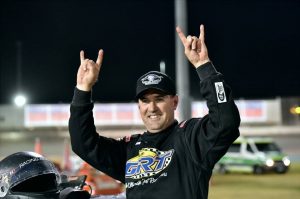 These three will be sure to continue their battle this weekend, but once again Ryan Halliday will be keen to spoil their party and make it two from two in his new Longhorn machine. Halliday was all class last weekend, recording his first feature win in a while and would love to back that up again on Saturday night.

Paul Stubber is another keen to get in on the action and after qualifying on pole position only to record a DNF he is sure to be fired up this weekend.

Ryan Ludlow put on a show in the feature last weekend, charging through from the rear to finish in sixth, so will be keen to qualify further up this time out and see what he can do.

Other names like Veronica McCann, Michael Holmes and Jason Bond also recorded strong results and will be 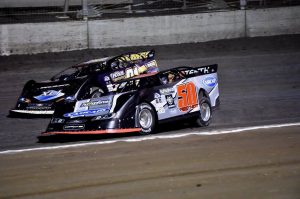 looking to do much the same this time out.

Craig Vosbergen was a late nomination at the last show and this will step aside to allow son Brent his first chance of competing this season. Cutting some impressive laps tonight at practice, Brent could be a dark horse this weekend.

The only other changes to this weekend’s field along with addition of Vosbergen, are the addition of David Nylander, while Chris Pavlovich, Nathan Callaghan and Aaron Hancock are not nominated. Lee Watt has once again nominated for this weekend and after a no show last time out should be a good addition this Saturday night.

Action is on track again this Saturday night, the 4th of November, with racing action from 5pm while Late Models are scheduled to make their first appearance in the first of four heats at about 7pm.