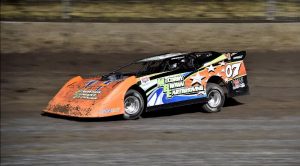 The WA State Late Model Championship will be held at Albany Speedway this Saturday night, the 23rd of January, while a second event, which will be the final of the Wild West tour, will be held at Esperance Speedway the following night, Sunday the 24th. This will be the nineteenth time the title has been held, with no less than five former winners entering, including defending champion Jamie Oldfield who won last year’s event at Collie Speedway in spectacular fashion. The event has never been held at Albany Speedway before, so a new chapter in the titles history will be written. Kodee Brown enters the event for the first time as the new Australian Champion, and after the form he showed last weekend, is sure to be a massive contender this time around. Brown has had success at the Albany venue before and will be hoping to add to his already massive resume again this weekend. Brad Blake has won the title nine times and no matter what has happened in previous weeks, he always lifts the bar at title times. He had a solid run last weekend and will be hunting for title number ten this Saturday night in what is sure to be a hard fought race. Craig Vosbergen is in good form and having won the event two times himself, fans can be assured he will race his hardest to grab a third title. He has also featured on the podium on three other occasions in the WA Title race so certainly knows what it takes to run up the front and will be settling for nothing less than the win. Marc Giancola, Warren Oldfield and Jamie Oldfield have each claimed the title on one previous occasions, and with all three showing last weekend that they are in red hot form, they cannot be discounted from grabbing a second title victory. Jamie Oldfield in particular has gone on record as looking for redemption this weekend, while Warren Oldfield was determined not to run second last weekend and will be going in with a similar outlook this time around. Jay Cardy is the only other man in the field to have featured on the WA Title podium, with three appearances. After a great weekend at the Australian Title where he scored two heat wins, was the high points scorer and started on the front row for the championship race, Cardy is certainly going to be hard to beat and he would love to claim his first title victory this weekend. Of course there is a while group of nineteen other drivers who will be hungry for title glory, including Kye Blight who grabbed a podium finish last weekend in a great performance, Jarrin Bielby who put on the best performance in his short Late Model career throughout the whole weekend and Morgan Melvin who made an impressive charge through the field in the Championship race. Interstate visitors Stuey Hill and Ben Nicastri have also stayed in Western Australia and would love to take a piece of WA home with them in the form of the WA Title. Hill, from South Australia, consistently got faster in last weekend’s racing while New South Welshman Ben Nicastri claimed QuickTime to begin the weekend and continued with solid results, something both of them would like to improve on this weekend. Add in drivers the ilk of Paul Joss, Paul Stubber and Michael Holmes who all had great runs across the title weekend, not to mention a whole host of others and this WA Title is going to be one not to miss. The full nominations for Esperance will also be released tomorrow, but in the meantime, make sure you head down to Albany Speedway this Saturday night for what is sure to be another epic WA Title event!