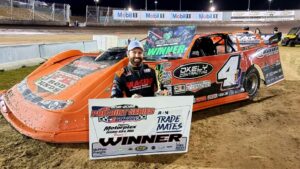 In what was the opening round of the 2021/22 Late Model Pro Dirt Series, proudly presented by ABN Trade Mates, it was an epic battle in the feature race that saw several different leaders but ultimately it would be Brent Vosbergen (Team Vosbergen Racing – TVR) who raced away to take the win.
With a good field of nineteen drivers on hand for the night’s proceedings at the Perth Motorplex, all would start the feature and with such a stacked field, it was anyone’s guess as to who would be able to last the thirty-lap distance.
The front row for the feature would be shared by pole sitter Brent Vosbergen and the Broome based Kodee Brown (McCorry Brown Racing Team) and as the lights went green, Vosbergen would get the jump on the inside. Brown though was just as quick and would launch around the outside to take the lead and lead the first lap.
Brent settled into second as the lead duo pulled away while Jay Cardy (Cardy Racing Components) in third lead the rest of the field.
With three laps complete Luke Halliday (Ryan Halliday Racing) and another car tangled in turn one with Paul Stubber also spinning to avoid. Halliday would be out while Stubber rejoined near the tail of the field.
Upon the resumption Brown would lead Vosbergen, Cardy and an impressive Matt Nylander (Nylander Motorsport) while a massive battle for fifth between about six cars ended with Matt Amato (Matt Amato Racing) spinning in turn four, seeing the drivers take some time under yellows to calm down and reset for the next twenty-six laps.
Brown again led away strongly from Vosbergen and Cardy, while Brad Blake, Matt Nylander and Warren Oldfield (Oldfield Racing) began to fight for fourth.
On lap five Brown continued to look incredibly strong and broke the one lap record for the Perth Motorplex, previously set by Warren Oldfield in 2014 and knocking just 0.007 seconds off to set the new mark of 14.911.
Matt Nylander got under Cardy for third on lap nine while a lap later the timing system would reveal that Brown was already 4.690 seconds ahead at the one third distance.
Lap twelve saw Brown begin to tackle traffic, while Matt Nylander continued his charge, driving right round the outside of Vosbergen for second.
Two laps later, Cardy would draw level alongside Vosbergen for third, but he was unable to make the move stick and shortly after he would end his night on the infield, capping off what had looked to be a strong night for him despite a small fire after his earlier heat race.
Back on track and lap by lap Matt Nylander would claw away at the lead Brown had built, and with ten laps remaining it was down to 1.501 seconds.
Stubber would snatch third from Vosbergen on lap twenty-one, but it would only be a few laps later that the makeup of the race would change.
With six to go Brown slowed suddenly with what appeared to be a collapsed front end, bringing the yellow lights on as he limped to the infield, and seeing Matt Nylander now the leader with just six laps remaining. 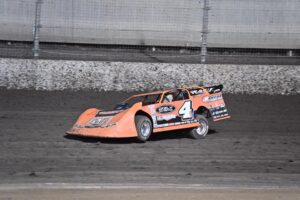 Nylander got swamped on the restart with Paul Stubber, who had raced his way from position seventeen on the grid, passing him along with Vosbergen. Stubber momentarily had the lead, but Vosbergen was able to roar back by while further back Nylander was passed by veteran racer Brad Blake. Behind them a number of other positions were changing and this continued over the final few laps, but in the end it was Vosbergen who claimed the win ahead of Stubber who put in a mammoth effort with Blake officially third. 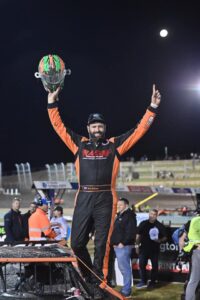 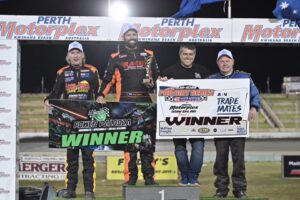