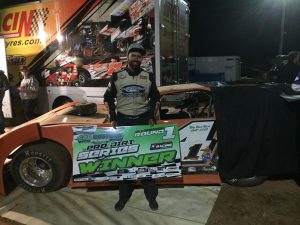 Brent Vosbergen last night scored a thrilling win in the opening round of the Carbusters Pro Dirt Series at Ellenbrook Speedway, starting from position eleven and stealing the lead in the dying stages to claim the win in the event, doubling as the annual Ray Tulk Memorial.

The feature race itself took a number of goes to get underway; the first start was called back due to a jump and the second start saw chaos unfold in the opening turn, with the area resembling a car park in an incident that eliminated Veronica McCann, Lee Redmond, Marc Giancola, Cody Avins and Rob Wells.

This would leave thirteen cars for the third attempt (with Rhys Wells and Kye Blight both unable to start the initial feature, Blight in particular damaging a motor in his heat race), but again cars would come together in turn one and setting up another full restart.

Finally the fourth attempt was a success, with pole sitter Michael Holmes shooting out to the lead from fellow front row starter Warren Oldfield while Ken Macpherson settled into third place.

Jason Oldfield, originally coming from tenth on the grid, quickly moved through into fourth as behind him Paul Stubber, the impressive Freddy Kinsella and rookie Matt Amato fought hard behind him.

Warren Oldfield began to pressure Holmes for the lead on lap five, something that would last for laps on end until eventually Oldfield looked under Holmes in turn two and got the corner, pulling into the lead on lap twelve. Meanwhile Macpherson was running right behind them and also looking for a way through.

Two laps later Macpherson moved under Holmes in turn one to grab second as Kinsella stole fifth from Stubber and set out after fourth placed Jason Oldfield.

Macpherson up front closed on Oldfield and looked for a way thorough but the move didn’t quite come off and the gap widened once more.

Lapped traffic came into play on lap twenty, with Oldfield slowing enough that Macpherson was right on his tail as they 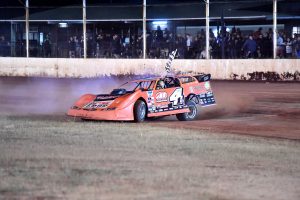 Macpherson looked for a way through but the first and only yellow light stoppage (once underway!) came on lap twenty one.

On the restart there was action everywhere: Warren Oldfield was away, Jason Oldfield got swamped and dropped back, Brad Blake pulled infield, and all of a sudden Brent Vosbergen, who had moved into fifth just prior to the restart, moved into second place.

Vosbergen set out after Oldfield, chasing him down and looking for a way through, just 0.097 seconds separating them with two laps to go. As the duo came around to greet the white flag Vosbergen had the nose in front and was able to hold the lead for the final circulation, winning the opening round, Ray Tulk Memorial double from Warren Oldfield while for the second year in a row, Ken Macpherson came home third in the opening round. 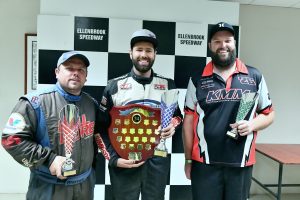 Courtesy of the points from night one, Vosbergen and Warren Oldfield currently hold the joint lead in the Carbusters Pro Dirt Series, and with Round Two set to get underway in a fortnights time at the Perth Motorplex, one thing is for certain…this is going to be a huge season!