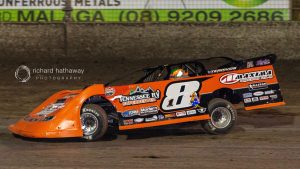 Brent Vosbergen has tonight become the first driver this season to claim multiple feature race wins with a thrilling performance at the Perth Motorplex to emulate his father’s efforts and become the King of Kwinana!

Vosbergen, who had been on the sidelines for the last couple of shows, qualified himself out of position three for the thirty lap feature behind the front row of Warren Oldfield and Marc Giancola, but it didn’t take him long to strike.

A number of cars came together in turn two on the opening lap of the initial start to bring out the yellows and set up a complete double fire restart.
The second attempt saw Warren Oldfield clear away immediately, Vosbergen following him on the inside as Giancola held off a snarling pack of cars led by Veronica McCann.

With one lap complete the yellows came on as Jason Bond found himself facing the wrong way in turn one.

Warren Oldfield again led away with Jason Oldfield making the big moves to grab third place but it was all for nought as a number of cars came together in turn one, negating the restart again.

Warren Oldfield and Vosbergen were away quickly at the next attempt, with Giancola and McCann in hot pursuit as Jason Oldfield and Cardy also looked for a way through.

Cardy used the highline to manoeuvre into fourth place and set about battling with Giancola while McCann and then Ryan Halliday began to stalk them.
Vosbergen made his moves and grabbed the lead on lap seven, with the yellows coming on again a lap later for Bond who spun again, this time in turn three.

Again Vosbergen and Oldfield would break away and continue their battle as Jay Cardy led a shuffled minor order which now saw Halliday ahead of Giancola and McCann as they too all looked to move forward. 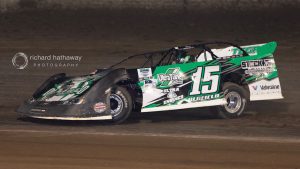 Vosbergen began to build up a lead on Oldfield while Halliday was applying the blow torch to Cardy, grabbing third place on lap ten.

Halliday then set out after Oldfield and closed the gap quickly, while behind them was a great battle behind them for fourth between Cardy, McCann and Michael Holmes.

The yellows would come out once again on lap eighteen, with Daniel Ameduri spinning to a stop in turn four to bunch the field up once again.
Vosbergen, Oldfield and Halliday continued their battle as the race went green again, as did Cardy McCann and Holmes, going three wide down the back straight a number of times in what was developing to be an excellent race.

All of a sudden Halliday’s car began blowing black smoke out of the back, seeing him quickly retiring to the infield just as a number of cars came together in turn one, the lead cars lucky to not get caught up as they came round at a rate of knots, and again the yellow lights were out.

The field bunched up for the restart with ten laps remaining and again Vosbergen led Oldfield and Cardy. The difference this time was Michael Holmes now putting the pressure on Cardy for third, and Jason Oldfield and Freddy Kinsella coming from the clouds to pressure McCann for fifth.

With eight to go Vosbergen was running low, Oldfield high and the gap was closing but the yellows came on again with Lee Redmond spinning in turn four.

Unfortunately due to the lateness of the hour and the number of stoppages, the race was then declared at twenty three laps complete and Vosbergen grabbed the fourth win of his Motorplex career, and his second feature win this year. The win also made him the King of Kwinana, which is an achievement his father Craig has also previously won.