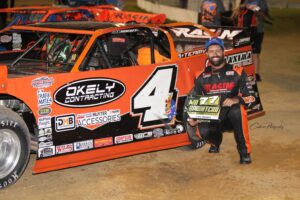 As has so often been the case this season, Brent Vosbergen (Team Vosbergen Racing – TVR)has tonight raced his way to a feature race victory at the Perth Motorplex!
Vosbergen was again class all throughout the night, recording a heat win and a narrow second place finish to Veronica McCann (Veronica McCann – Red Hot Racing) in his other preliminary to set up a pole position start.
He was joined on the front row by Joe Chalmers (Team BCM Motorsport:) who also recorded a heat win as well as a third place, while the second row was filled out by Veronica McCann and Jay Cardy (Cardy Racing Components).
Vosbergen went straight into the lead as the green flag flew, with Chalmers left in his dust in second while Jay Cardy and Warren Oldfield (Oldfield Racing) went side by side for third.
Cardy would grab third on lap five, while back up front Vosbergen would begin to encounter lapped traffic on the sixth circulation.
Warren Oldfield slowed shortly after before retiring infield, allowing Veronica McCann into fourth after she had moved past Michael Holmes Michael Holmes Racing) the previous lap for fifth.
Freddy Kinsella (Team Green Racing) also moved into the top five by the time ten laps were complete.
Lap twelve saw McCann get stuck in traffic and Kinsella pounced to take fourth, but a lap later McCann fought back to retake the position.
Kinsella however did not give up and would be back in fourth the next lap, while Jamie Oldfield (Oldfield Racing) would also arrive on the scene and take fifth away from McCann shortly after.
The first and only yellow light stoppage of the race happened at the halfway distance as Nathan Richards spun, with Warren Minshull also involved. 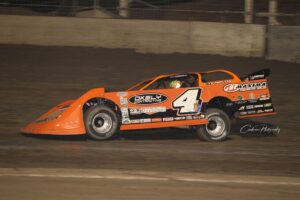 Cardy used the restart to his advantage to claim second from Chalmers, while Jamie Oldfield put the car on the highline and went right around Kinsella for fourth.
With ten to go Michael Holmes also made his way into fifth place, with Vosbergen still well ahead of Cardy, Chalmers and Jamie Oldfield.
Cardy and Chalmers continued to fight hard for second and with seven to go Chalmers managed to dispose of Cardy and began to race away, while Jamie Oldfield then began to pressure Cardy after weaving his magic through lapped traffic to close the gap.
With two to go Holmes joined the battle, with the three cars fighting for third but in the end it was Vosbergen who was too far ahead, claiming his sixth feature win of the season at the venue, crossing the line ahead of Chalmers and Cardy. 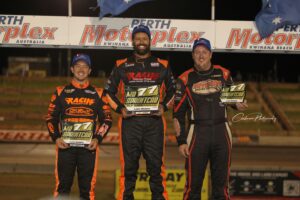