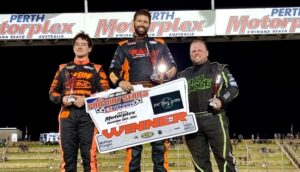 For the third time this season Brent Vosbergen (Team Vosbergen Racing – TVR) has again finished his night atop the podium, this time in the sixth round of the Pro Dirt Series at the Perth Motorplex, proudly presented by the Dirt Track Nutters.
This would however be the first time for the season Brent did not qualify on the front row of the feature, with that honour shared by DTN Pole Position winner Jason Oldfield (Oldfield Racing) and surprise packet Daniel Ameduri (Ameduri Motorsports).
Oldfield claimed a heat win and a third to earn the number one starting position while Ameduri claimed a fourth and a second to lock himself onto the front row; Vosbergen’s win and sixth place finishes putting him out of position three alongside Brad Blake.
As the race went green Jason Oldfield got the jump, but Vosbergen used the lowline to steal the lead coming out of turn one and was followed through by the impressive Smokin’ Joe Chalmers (Team BCM Motorsport:), who started in position five, while Oldfield went slightly sideways, dropped down low and settled into third.
Oldfield would get back underneath Chalmers in turn two a lap later to retake second place, but by this time Vosbergen was already streaking away and this would continue, over 2.2 seconds ahead with five laps complete.
Brad Blake and Warren Oldfield(Oldfield Racing) were fighting hard for fourth with last start Motorplex winner Matt Goodlad (Daytona Racing) right behind them and Paul Stubber running the highline to keep pace with them.
Further back Veronica McCann (Veronica McCann – Red Hot Racing) survived a hairy moment in lapped traffic but dropped a couple of spots, the action on across the track as everyone fought for position.
Back up front though and Jason Oldfield refused to give up, chasing down Vosbergen and closing the gap to 0.5 seconds on lap ten. 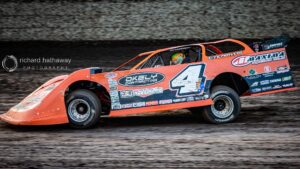 Seeing the nose of Oldfield seemed to give Vosbergen the boost he needed, seeing him accelerate away, but it didn’t matter as the race came under yellow lights for a spun Stubber, with Daniel Ameduri retiring infield after becoming involved in the accident.
The restart saw the whole field fighting tooth and nail once more in a massive pack, but again Vosbergen would pull away with Oldfield chasing until one lap later when the yellows came out again, this time for Brad Ludlow Ludlow Racing), back aboard the familiar #92 machine tonight, who crunched the turn four wall.
The restart saw Jay Cardy (Cardy Racing Components) get a massive run through the middle of the field, but ended with contact on Warren Oldfield who spun and forced the field to take evasive action, luckily no one else getting involved.
As the field attempted the restart once again Chalmers took his opportunity and grabbed second from Oldfield and set out after Vosbergen.
Three laps later the yellow lights were out once again, this time for an incident that saw Brad Blake, Freddy Kinsella (Team Green Racing), Veronica McCann and Paul Stubber all head infield. The yellows would then come out once again for a spun Nathan Richards, with Vosbergen again being forced to come back to the field and have another go at finishing the race.
The final stanza ran without another stoppage, but it certainly wasn’t without issues. Warren Oldfield took advantage on the restart and moved high, looking for a way to get by brother Jason for third, eventually making the move on lap eighteen.
Kodee Brown (McCorry Brown Racing Team) would retire infield aT this stage and shortly after, Jason’s car began emitting a thin stream of smoke, that steadily got worse as the laps wound down and eventually forced him infield four laps shy of the finish.
This would leave just ten cars on track, with the biggest battle being between Cardy and David Nylander (Nylander Motorsport) for fifth: Cardy making a late race pass on Nylander for the position, with Nylander getting back by on the back straight on the final lap.
In the end though it was Vosbergen who would go on go claim his third win for the season, defeating an impressive Joe Chalmers in his second ever Pro Dirt podium finish and Warren Oldfield. 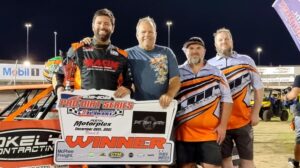