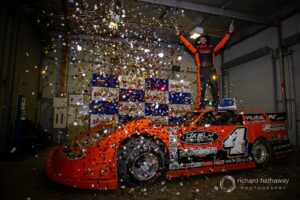 After five nights of intense racing, one set of qualifying laps, twenty-five heat races, and six feature races, Brent Vosbergen showed he is the Ace in the hole, emerging as the new Sheriff in town and outlasting all the other outlaws to win the gun slingin’ Wild West Showdown!

Vosbergen was all class across the series, putting aside an opening round DNF to fight back and record three wins and a second place in the final four rounds feature races to claim the overall series win by a mere eight points over his nearest rival Warren Oldfield.

He would also record an incredible five heat races (out of a possible nine), plus a further two second places and a third place, his worst finish a fourth place in the heats, an incredible effort all around.

Warren Oldfield had an up and down series, also recording a DNF in the series opener, before coming home fourth in the second round despite having a car that ended upside down, followed by three second place finishes in a row in the last three rounds to seal second place overall. He too claimed five heat races across the series.

Jay Cardy was a model of consistency across the series, leading the overall standings for a number of rounds before being forced to settle for third overall after recording a fifth, two sixth’s, a seventh and an eighth. Cardy would claim three heat race wins. 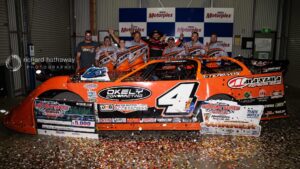 The points were incredibly tight at the end, with Vosbergen just eight points ahead of Oldfield while Cardy was just twenty points further back in third.

Smokin’ Joe Chalmers was only three points behind Cardy in fourth place overall (with two thirds, a fourth, a seventh and a ninth), while Daniel Ameduri, who hung around in the top three for most of the series and recorded three fourth place finishes, plus a sixth and a tenth, was just one point further back in fifth place.

Jamie Oldfield (one win, two thirds, a fourth and a DNS), Veronica McCann (a third, a fifth, a seventh, a twelfth and a fourteenth), Brad Blake (a win, two second places, a DNF and a DNS), Michael Holmes (two sixth’s, two seventh’s and a DNF), and Rod Musarra (a third, an eighth, a ninth and two DNF),  would round out the top ten overall finishers in a series that saw a number of drivers step it up and really bring the action to the more regular front runners.

A total of thirty-three drivers would compete in the Wild West Showdown, with four drivers claiming a feature race win (Vosbergen, Paul Stubber, Jamie Oldfield and Brad Blake) while a total of eight drivers made their way onto the feature race podium across the series. Amazingly, twelve different drivers also claimed heat races across the five nights.

It was a massive five nights of action, and a huge thankyou to all the drivers for participating, plus all the families, crews and spectators who got behind their favourites and attended both the Perth Motorplex and Ellenbrook Speedway to be part of the event. Also a big thankyou to all the people who worked behind the scenes at both tracks to help make the events a success. 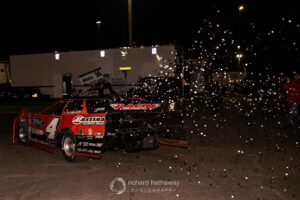 Let’s do it all again next year! 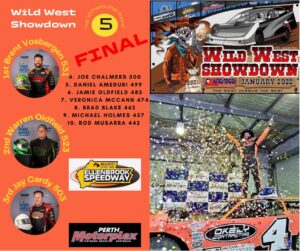