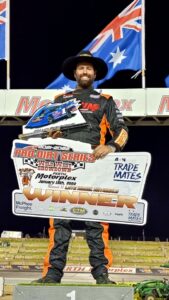 For the first time in his career, Brent Vosbergen (Team Vosbergen Racing – TVR) tonight became the Late Model Nationals Champion at the Perth Motorplex.
Across the two nights Vosbergen was the model of consistency, finishing second in both of his preliminary night heat races and then again in his opening night feature, before breaking through for a heat win tonight.
This would be enough to put him out of position three for the feature race behind an all Oldfield front row, and after a good battle, he was able to walk away the winner!
Jamie Oldfield (Oldfield Racing) would start from pole alongside Warren Oldfield (Oldfield Racing) and as the thirty lap feature race went green, Warren would just edge out in front.
Vosbergen would dive under Jamie for second as they crossed the line for the first time while Rod Musarra (Rod Musarra Racing #12), having the best weekend so far of his short Late Model career snuck into fourth and trailed Jamie, the top four in a line.
Vosbergen would then move underneath Warren coming out of turn four to complete lap three and take the lead. A lap later Musarra would also move low and take third from Jamie.
Warren then touched the wall down the back straight on lap five while Jamie went back around Musarra to retake third, Jamie then closing on Warren while behind them Paul Stubber had broken free of the chasing pack and into fifth, setting out after Musarra.
Warren got baulked by a lapped car on lap seven, which allowed Jamie through with Musarra also right behind him, the cars bunching up in what was becoming a tight battle.
Up front Vosbergen was pulling well away, while Musarra just would not give up, using the low line to pass Warren for third. 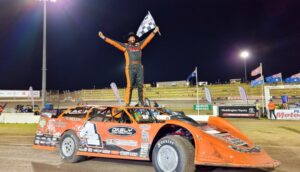 Heavy lapped traffic for Vosbergen on lap ten looked to slow Vosbergen’s progress, but he got through unscathed, as did Jamie, while Warren and Musarra continued their battle side by side through traffic, Warren taking advantage to retake third on lap fourteen.
Stubber also got by Musarra at the same time, with Veronica McCann (Veronica McCann – Red Hot Racing) and Joe Chalmers (Team BCM Motorsport:) now on the scene after starting seventh and ninth respectively, in what was now a five car battle being waged all in one section of the track with plenty of lapped traffic also making life interesting.
Chalmers went high, McCann low, and Chalmers would come out with fourth on the sixteenth circulation ahead of Musarra, McCann and Stubber.
Next Jason Oldfield (Oldfield Racing) and Jay Cardy (Cardy Racing Components) arrived on the scene to make it a completely chaotic battle, but eventually it all came undone when Jason Oldfield hit the turn two wall heavily with eighteen laps complete.
By this point Vosbergen had a lead that was nearly five seconds on his competitors as the yellows flew, bunching the field back up.
Vosbergen was quickly away while the two Oldfield’s went side by side for second, Chalmers chasing hard in fourth. McCann then moved into fifth, with Cardy now sixth, the dup then swapping positions a number of times over the next few laps.
Back up front Vosbergen survived a hairy moment with a lapped car and Warren Oldfield took the opportunity to close the gap, but was unable to make the move. Chalmers then dove under Jamie Oldfield on lap twenty six and the duo made contact but Chalmers got the position and Jamie was forced to fight hard to challenge Chalmers, while McCann was right behind them also looking for a way through. 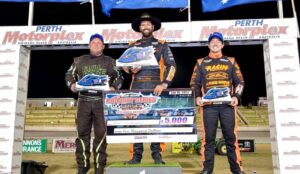