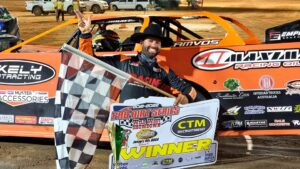 Last night at the Allwest Plant Hire – Ellenbrook Speedway Brent Vosbergen (Team Vosbergen Racing – TVR) continued his amazing season, fighting his way to the front in the thirty-lap feature to take the win away from the local competitors in what was the third round of the Wild West Showdown, and in the process moving himself into the top three in the overall standings.
The event, which also doubled as the ninth round of the Pro Dirt Series, proudly presented by CTM Recruitment Pty Ltd, saw four different drivers lead laps in the feature race, with six different drivers running in the top three at different stages throughout the race.
Earlier in the night, heat races went the way of Kye Blight (Kye Blight Racing), Jay Cardy (Cardy Racing Components), Warren Oldfield (Oldfield Racing) and Brent Vosbergen, with Cardy doing enough in his second heat to secure the pole position starting position for the feature alongside Warren Oldfield, while Blight and Vosbergen would start on the second row and Jamie Oldfield and Brad Blake coming from row three.
Cardy would lead the opening lap, edging out Oldfield and Blight, the race quickly setting into a rhythm. Unfortunately, on lap three Richard Wells (CTM Recruitment Racing) and Peter Mewett would have a coming together, bringing out the yellow lights and seeing Mewett forced infield with damage.
The race restarted and Cardy again resumed control over Warren Oldfield and Blight, who was now coming under pressure from Blake, while just behind them, Vosbergen and Jamie Oldfield (Oldfield Racing) were having a ding dong battle, swapping positions a number of times.
On lap seven Blake was able to make his move and grabbed third place, setting out after Warren Oldfield and it would only be a few laps before the order changed once again. Oldfield managed to get past Cardy for the lead on lap eleven, with Blake following him through, the duo now fighting it out for the lead as Blight began to pressure Cardy for third.
Lap twelve saw the first of the lapped traffic, and lap sixteen was when Jamie Oldfield and Vosbergen both passed Blight to take over fourth and fifth respectively, their battle still raging.
Vosbergen got by Jamie Oldfield on lap eighteen, then past Cardy for third on lap nineteen, Oldfield following him through a lap later.
From here there were even more changes at the front of the field, Blake grabbing the lead on lap twenty-three, Vosbergen also passing Warren Oldfield for second, then Vosbergen grabbing the lead on lap twenty five.
Lap twenty-seven saw the cautions out for a spun Damian Hudson, but the next attempt at a restart would see the biggest issue of the evening, Warren Oldfield and Blake fighting for position going down the back straight, Blake ending up in the turn three wall after getting some significant air and pirouetting at quite a speed.
Blake’s race was over, and the restart would now see Vosbergen leading away Warren Oldfield, Blight Jamie Oldfield and Daniel Ameduri (Ameduri Motorsports) who had moved into the top five after running a consistent race just behind the lead pack.
Over the final few laps tyres also became an issue, Graham Murray retiring infield, while Rod Musarra (Rod Musarra Racing #12) followed him a lap later with mechanical issues, then Blight also coming to a stop on the infield with only a few laps remaining.
Cardy also had tyre issues, which allowed Jamie Oldfield through for third, followed by Ameduri and Jason Oldfield who had raced from position thirteen on the grid to fifth.
In the end though, Vosbergen was able to cross the line in first followed by Warren Oldfield, Jamie Oldfield, Ameduri and Jason Oldfield, second through to fifth all local Ellenbrook drivers. 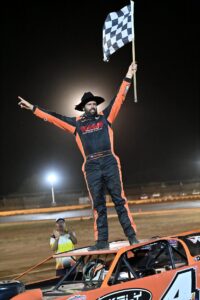 Michael Holmes (Michael Holmes Racing) was next across the line followed by Joe Chalmers (Team BCM Motorsport:), while an ailing Jay Cardy held on for eighth, followed by Peter Seaton, Damian Hudson and Wells as the final finishers. Veronica McCann (Veronica McCann – Red Hot Racing) suffered a flat tyre on the final circulation to finish on the infield.
With last nights results taken into account, the Wild West Showdown points have tightened up even more, so stay tuned later today as we release the standings, while the final weekend of racing for the Wild West Showdown Series will be held this weekend across two nights, the 14th and 15th of January, back at the Perth Motorplex! 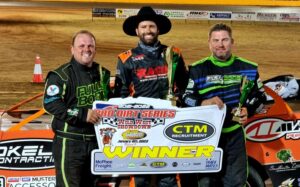