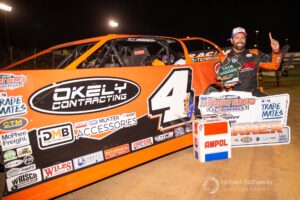 Brent Vosbergen (Team Vosbergen Racing – TVR) has added yet another notch to his belt in season 2021/22, this time by claiming his second WA Title tonight at the Perth Motorplex in what turned out to be an epic event presented by ABN Trade Mates, with Vosbergen going through the entire event undefeated.
After what was a great first night of racing on Friday, twenty cars would return to the track today, with three non-stop heat races won, all with race times within one second of each other and wins claimed by Vosbergen, Kodee Brown (McCorry Brown Racing Team) and Warren Oldfield (Oldfield Racing).
There were dramas on the form up lap for the thirty lap final as the Grand National of AJ Nylander (Nylander Motorsport), which was pacing the field to honour the legend, headed infield while Kodee Brown also suffered dramas as the field went four wide, a number of cars having to stop to avoid him and unfortunately for Brown he was unable to retake his position in the field.
Brent Vosbergen was quickly into the lead as the race went green, Brad Blake having the best run as he slid through the gap created by two cars to grab second place through the opening turns.
He would be followed by Joe Chalmers (Team BCM Motorsport:), Veronica McCann (Veronica McCann – Red Hot Racing) and Warren Oldfield as the top five in the opening laps.
Rod Musarra (Rod Musarra Racing #12) was next to make an impact, passing Oldfield on the low line for fifth, while up front the top four
began to spread out slightly.
Musarra found himself under siege from the Oldfield brothers Warren and Jamie, but he continued to hold his nerve until Warren finally got through several laps later.
Vosbergen found himself in lapped traffic on the ninth circulation and he certainly wasn’t holding anything back, diving under them and racing around them as if they were standing still as he worked to build his lead over Blake.
Warren Oldfield at this point was looking for a way past McCann, who was now 3.5 seconds behind third placed Joe Chalmers who was running a lonely race as Blake was over 2.5 seconds ahead of him in second.
At the halfway point of the race Vosbergen was 2.763 seconds ahead of Blake, followed by Chalmers, Warren Oldfield, McCann, Musarra, Michael Holmes (Michael Holmes Racing), Jamie Oldfield, Matt Amato (Matt Amato Racing) and David Nylander in tenth place.
All of a sudden Blake began to cut down the gap, lapped traffic also playing its part and the top two were separated by just over a second with ten laps remaining.
Very quickly though, Vosbergen found himself passing a heap of lapped cars and then there were seven cars separating the top two, which in turn allowed Chalmers to catch Blake with just five laps remaining.
David Nylander (Nylander Motorsport) suddenly slowed and headed infield, with Chalmers getting some airtime as they clashed, but Chalmers was able to continue and again catch Blake, the duo finally clear of traffic with two laps remaining. 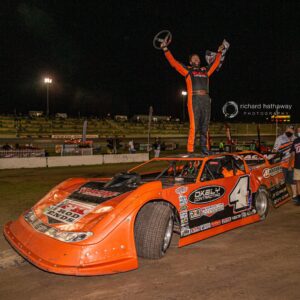 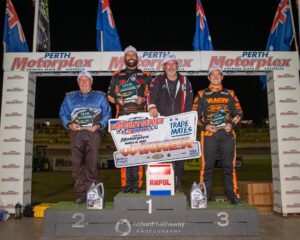