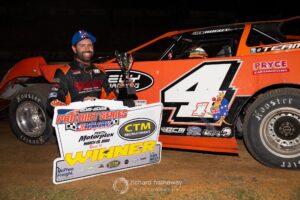 For the tenth time this season, Brent Vosbergen (Team Vosbergen Racing – TVR) has made his way into victory lane, this time by claiming round fourteen of the Pro Dirt Series at the Perth Motorplex, proudly presented by CTM Recruitment Pty Ltd.
For the second time in as many meetings, Brent went through undefeated in the heat races, setting up a pole position start alongside Kodee Brown (McCorry Brown Racing Team) for the thirty lap feature and, again for the second time in as many meetings, the thirty lap feature race would run non stop.
Brent would immediately move into the lead as the race went green, followed by Brown, with Warren Oldfield (Oldfield Racing) coming from row two and working underneath Brown for second.
Vosbergen was over a second ahead by the completion of lap number two, with Brown being forced to hold off a fighting Joe Chalmers (Team BCM Motorsport:), who would get by him on lap three.
Chalmers then passed Oldfield with ease the next lap to move into second place.
Lap five saw Matt Goodlad (Daytona Racing) running the lowline to move into fourth past Brown, and from here the field spread out like the proverbial Brown’s Cows.
Vosbergen found himself moving past the first of the lapped traffic on the eleventh circulation while second placed Chalmers was into lapped traffic three laps later, such was the Vosbergen lead.
At the halfway distance Vosbergen found himself in heavy lapped traffic with cars eighth through to eleventh all battling it out in front of him.
This allowed Chalmers to close the gap significantly, and Vosbergen again found himself in a bit of strife on lap twenty with another lapped car, seeing Chalmers again close the gap.
By lap twenty-two Vosbergen and Chalmers were clear of traffic, with less than a second separating them and over the next few laps this gap would lessen, setting up an exciting run to the chequers.
With five to go the duo began running very similar lap times, seeing the gap stay the same and Vosbergen would get to the flag first, followed by the impressive Chalmers, with Warren Oldfield the length of the straight away finishing in third. 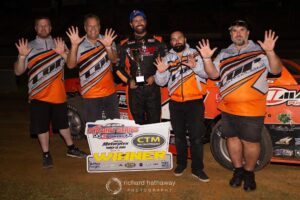 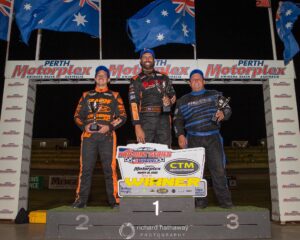