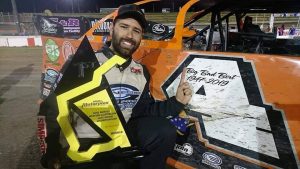 Just weeks after the passing of his legendary Grandfather Bert, Brent Vosbergen has honoured him in the best possible way as he emulated his efforts, and those of his father Craig, to grab a WA State Title victory.

Vosbergen was all class all night, setting the fastest time overall in qualifying, winning a heat and coming second in the other to set up a front row start, then leading most of the thirty lap feature to claim his first WA Late Model Championship.

As the feature race went green Vosbergen was first to grab the lead but pole sitter Marc Giancola ducked straight by him and went into the lead.

Blake, Blight and Halliday went three wide on lap three, Halliday dropping to fifth as Blight took over third place and set out after Giancola who was by now under pressure from Vosbergen.

Blake then caught Blight and used the lowline to grab third place with Vosbergen looking to do the same up ahead to Giancola but unable to make the move stick.

Michael Holmes, Joe Chalmers and Warren Oldfield were also engaged in a three car battle for sixth, the trio swapping places almost every corner and fighting it out in very close quarters in what was an exciting group to watch.

Back up front though and Vosbergen finally made his move past Giancola to grab the lead on lap seven and it was like letting a horse out of a stable, Vosbergen bolting away as Giancola came under pressure from third placed Blake.

Halliday also managed to get past Blight, the duo also having their own battle for fourth place over the next few laps.

Vosbergen encountered lapped traffic on lap twelve but it didn’t faze the youngster, diving through and maintaining his lead over Giancola, who had also managed to put two lapped cars between himself and Blake.

At the halfway mark Vosbergen had clear air in front and a good gap back to Giancola, who in turn had a good distance to Blake.

Blight and Halliday were still in the top five while Oldfield and Holmes were still continuing their own battle behind them.

With seven laps to go Vosbergen was in heavy traffic, with Giancola and Blake engaged in their own battle amongst the lapped cars. It was at this point it very nearly all came undone as Ken Macpherson spun, Giancola and Blake very close to being in contact and the yellows coming on.

The restart got underway but this time it did all come undone, Blake and Giancola making contact in turn three, Blake spinning and Halliday, defending WA Champion Paul Stubber, Blight, Joe Chalmers and Jai Mazzini all piling into what resembled a used car yard at the top of turn three.

Unfortunately the incident eliminated all but Halliday and Blight in the end, and the next attempt at a restart saw Vosbergen away while Blight began his usual spoiler destroying antics, running the fenceline as he moved into third place.

The white flag flew with Blight doing all he could to get by, but in the end it was Vosbergen going on to claim the feature win, his first Pro Dirt Series round win and of course his first win in the WA Championship.

Marc Giancola came home second while Warren Oldfield made a last corner pass to commit daylight robbery and steal third place on the line by 0.067 seconds from Kye Blight. Michael Holmes rounded out the top five while Macpherson and Halliday rounded out the only other cars on the lead lap.

With tonight’s results now added to the Sims Metal Management Late Model Pro Dirt Series pointscore (tonight also doubled as round eleven of the series) Marc Giancola has converted his high points night into the overall lead, now ten points ahead of Michael Holmes with just one show remaining. Brad Blake is still third while Jay Cardy and Ken Macpherson round out the top five. Holmes however does still hold the lead in the Perth Motorplex Track Championship ahead of Ryan Halliday and Giancola.

After tonight’s show the Late Models now have another fortnight off before the grand finale for season 2018/19 at the Perth Motorplex on the 13th of April! 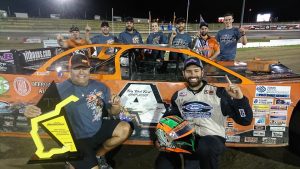 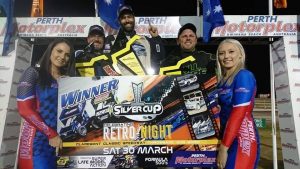