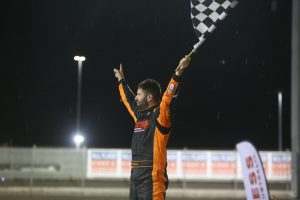 In what was one of the most dominant nights of his career, Brent Vosbergen has tonight made up for the disappointment of his recent WA Title defence in the best possible way as he raced his way back into victory lane tonight at the Perth Motorplex!

Brent, driving his father Craigs #8 machine, was unstoppable all night, winning both of his heat races to start on pole for the thirty lap feature race and although he didn’t have it all his own way, he was at the front when it counted as he claimed his third feature win of the season and his sixth career Perth Motorplex feature win.

A good field of twenty four cars would start the night, with twenty two of those able to start the feature race as Jayden Meckenstock had his tail shaft break as the field was forming up, sending him infield, while Daniel Ameduri, who was a mile in front in the first heat, also broke a tail shaft along with a gearbox and other parts and ended his night early.

As the feature race went green for the first time it was the wily veteran Brad Blake, looking to equal the all-time feature wins record at the Perth Motorplex, who shot away to the lead, but the race would only last one lap as Jai Mazzini spun in turn three to bring on the yellows.

Attempt number two saw Blake again race away, hotly pursued by Vosbergen and Ryan Halliday, Halliday grabbing second as they completed the second lap, while behind them a pack of five including Marc Giancola, Michael Holmes, Warren Oldfield, Paul Stubber and Jay Cardy were fighting hard for fourth.

Holmes, Giancola and Stubber all took turns in fourth place, Holmes grabbing the position on lap four and setting out after the top three, but still pursued by Giancola, who was then passed by Oldfield a lap later for fifth.

Back up front Blake was leading Vosbergen, who had gotten back by Halliday, a merry dance, with lapped traffic coming into play on lap six and Vosbergen taking the opportunity to pounce and grab the lead as Blake negotiated his way through on lap eight.

Blake retook the lead the very next lap, running the top as Vosbergen ran the lowline, with Vosbergen retaking the lead once again as the battle continued.

Vosbergen shot away from Blake with Halliday also getting by and into second, but a lap later the returning Clint Noakes and Freddy Kinsella got together, with Daren Currell ending up stranded across the track and Simon McNab then piling in.

With Stubber also heading infield at the restart, the field was down to seventeen drivers on track, with Vosbergen and Halliday now rounding out the top three. Marc Giancola then had a sudden emission of black smoke coming from his car so he too headed infield.
Vosbergen was back in traffic on lap nineteen as Warren Oldfield passed Blake for third and set out after Halliday, running around the outside then ducking underneath to take second on lap twenty.

All of a sudden Halliday and Blake, who were battling for third, came together in turn three, with Halliday spinning to a stop and bringing out the yellows with twenty laps complete, Halliday then heading infield as his immaculate #99 machine also began emitting smoke.
Vosbergen again led on the restart but the real battle was Oldfield and Blake who were fighting for second, Oldfield getting it back and setting out after Vosbergen. Despite his best efforts though, Vosbergen was just too strong, claiming the win ahead of Oldfield and Blake. It was a win in more way than one for Vosbergen, with rain starting to fall as he did some victory donuts; perfect timing after a great event!

Courtesy of tonight’s results, Warren Oldfield now has a sixty eight point buffer on Michael Holmes in the Perth Motorplex Track Championship, with Brad Blake in third, while Oldfield has also extended his points lead with just two rounds remaining in the Carbusters Pro Dirt Series, with a full points list to be posted tomorrow. 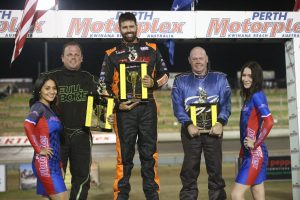