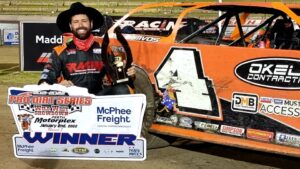 It was a pretty rough and tumble feature race last night at the Perth Motorplex, but as has so often been the case this season, Brent Vosbergen claimed the feature win once again in what was the second round of the Wild West Showdown, doubling as the eighth round of the Pro Dirt Series, proudly presented by McPhee Freight.
Vosbergen scored a win and a third in his heats, which meant that for the sixth time from eight rounds, he would start from pole position for the feature, alongside an impressive Michael Holmes and in front of the second row comprised of Jay Cardy and Joe Chalmers, all three of whom also claimed a heat race win.
Once again Vosbergen made the most of his strong starting position, shooting away to the lead immediately, Holmes into second followed by Cardy, Warren Oldfield and Chalmers.
The top five settled into a nice rhythm, the main battles being Jamie Oldfield looking for a way past Chalmers for fifth and Cardy applying the pressure to Holmes for second at this stage.
Unfortunately for Cardy, a lapped car came out right in front of him just as he was looking under Holmes for second, seriously inconveniencing him and forcing him to build his momentum up once again.
The yellow lights came on for the first time early in the race after Robbie Cox spun in turn two, but this gave Cardy the chance he needed, racing into second on the restart.
Chalmers, running the high line, caught third placed Holmes and passed him, setting out after Cardy and then grabbing that position on the seventh circulation, Holmes then following him through to retake the third position.
Shortly after, Warren Oldfield arrived on the scene and grabbed fourth on lap nine.
The yellows were out again shortly after as Greg Horan and Damian Hudson spun together, with Cox spinning to avoid and Chalmers also getting involved, but getting his spot back on the restart.
The restart saw last start winner Paul Stubber retire infield, while Holmes retook second as the race went green again but Chalmers went back around the outside to hold position.
Back in the field a number of cars came together, Brad Blake and David Nylander the ones left to drop a number of spots, Nylander then retiring infield.
By this stage, Vosbergen was again away, with Chalmers second from Holmes, Cardy and the Oldfield brothers, who were both looking to continue the form that netted each of them an earlier heat race win. 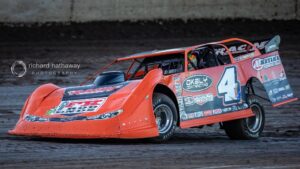 Jamie Oldfield put Cardy under pressure but Cardy was able to accelerate away again and all of a sudden the cars were going three wide in the battle for second, with Chalmers high, Cardy low and Holmes in the middle.
At the halfway point of the race Chalmers was back in second, while Jamie Oldfield got past Cardy for fourth.
Jamie then looked under Holmes for third, dove underneath him in turn one and took the position on lap seventeen.
With twelve remaining the yellows came out once again, this time for an uncharacteristic spin from Kodee Brown.
On the restart Cardy passed Jamie Oldfield for third, but Oldfield got back under him and set out after Chalmers for second, who was right on leader Vosbergens tail as he didn’t get away to the gap he had previously enjoyed.
Once Vosbergen got wound up once again he began to build the gap once more, while behind him Oldfield, Chalmers, Cardy were still fighting with second while Brad Blake, who had raced his way back through was also involved in the battle, grabbing third on lap twenty two and then second a lap later.
By this point Vosbergen was fighting a battle with lapped traffic, which allowed Blake to close the gap to 0.4 seconds with only a handful of laps remaining, while the battle for third was also looking to come down to the wire.
All of a sudden Chalmers had steering issues and retired to the infield, lucky to be missed by a big group of drivers, but up front it was all Vosbergen who did a valiant job to hold off Brad Blake as the chequered flag flew (who did a great job to fight back after being as low as twelfth at one point in the race), with Jamie Oldfield crossing the line in third.
Unfortunately, they were the only three to officially greet the chequered flag, as chaos had unfolded behind them in the final turns, with Greg Horan spinning, leaving Warren Oldfield nowhere to go as he spun to avoid contact.
In turn Damian Hudson piled in and this saw Warren Oldfield rolling upside down at the top of turns three and four, with Daniel Ameduri doing his best to avoid contact, Kodee Brown then piling in at a rate of knots and seeing the red lights come on. 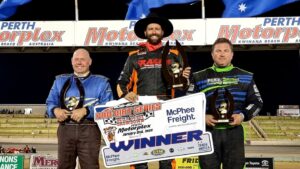