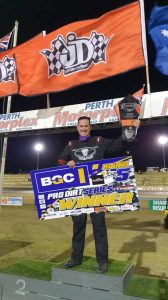 Ryan Halliday has tonight become the first dual winner of Late Model features in the 2020/21 season as he claimed the Round Four BGC Pro Dirt Late Model series feature win tonight at the Perth Motorplex.

A good twenty two car field was in the pits and they certainly didn’t make it easy for Halliday who had to survive a clash with Warren Oldfield as they were fighting for the lead. Halliday was able to survive though and put on another impressive show to claim the win, his seventeenth at the Perth Motorplex, as he defeated veteran driver Brad Blake and first time Pro Dirt podium getter Matt Amato.

Warren Oldfield would start on pole for the third time in four rounds this season, alongside Halliday and would get the jump into the opening turns, with Halliday left to chase, but it all amounted to naught as Jason Bond spun in the middle of the pack, Brent Vosbergen and Laura Byrnes just two of the cars to come to a stop with him.

Bond would head infield a flat tyre, as would David Nylander, while Brent Vosbergen gingerly made his way back out onto the track before heading infield, leaving eighteen cars to restart.

The second attempt saw Oldfield and Halliday side by side down the straight, Oldfield making the most of the lowline to slingshot into the lead going through the opening turns. He would hold that lead as they crossed the line to complete lap one.
Halliday looked to get back by him but couldn’t make it stick until he tried again coming out of turn four to complete lap two and take the lead. Joe Chalmers was in third, but on the third lap found himself swamped, with Kodee Brown, Ken Macpherson, Matt Amato and Matt Goodlad all making their way past.

Lapped traffic approached quickly but did nothing to slow Halliday down, weaving his way through, however the cautions would come on with six laps complete for Nathan Richards who was facing the wrong way in turn two.

The restart didn’t last long as Paul Stubber and Matt Goodlad made contact in turn one, seeing both spin, then Jamie Moon left with nowhere to go but to cannon into Stubber. Both Stubber and Moon would be out.

Halliday again led the field away, Kodee Brown now making his presence felt as he worked the outside of Oldfield for the next few laps in third place and looking for second. All of a sudden Oldfield and Brown caught Halliday, going either side of him to make it three wide before Halliday regained his advantage, the top three going hammer and tongs as they looked to take the point.

Brown eventually got by Oldfield on lap nine, but Oldfield fought back and again retook second place on lap twelve.

Brown would then drop back from the lead duo and Matt Amato took his chances, chasing down and passing Brown to move into the final podium spot, with Matt Goodlad also on the pace looking for a way past Brown.

Back up from Halliday was still leading Oldfield, neither gaining an advantage on the other, the distance being maintained lap after lap.

With nine to go Halliday was working his way past a lapped car and Oldfield took a chance going low on Halliday, that didn’t pay off, seeing Oldfield riding over the front of Halliday and both half spinning up the track. The gap between them and third placed Amato was such that neither lost a position, but Oldfield had steering damage and hit the wall in turn two after he continued, seeing him slow significantly and continue circulating, albeit slowly.

This would leave Matt Amato now in second ahead of Goodlad, but the yellows would come on for Jason Oldfield who slowed with damage, bunching the field up with five laps remaining.

Halliday again raced away, with veteran Brad Blake making the most of his opportunities to grab second from Amato in the final stanza, trying to chase down Halliday but ultimately falling short, Halliday claiming the win from Blake and Amato. Kodee Brown would continue his strong season with a fourth place, followed across the line by Goodlad, Ken Macpherson, Jay Cardy and Joe Chalmers as the last car on the lead lap while Veronica McCann, David Boyes, Laura Byrnes, Brendan McKeagg and Nathan Richards would all finish the race a lap down.

There is now a break for the Late Models before they again return to the high banks of the Perth Motorplex for the Christmas Cup on Boxing Day, which will double as Round Five of the BGC Pro Dirt Series.