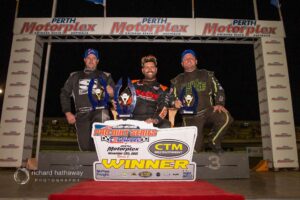 For the second time in as many shows, Brent Vosbergen has returned to the top step of the podium to claim the win, and in the process reclaimed the King of Kwinana crown that he previously won a couple of years ago in the event that doubled as Round Two of the Pro Dirt Series, proudly presented by CTM Recruitment Pty Ltd!
It was an up and down for many competitors at the Perth Motorplex tonight, with the four heat race wins being shared by Vosbergen (Team Vosbergen Racing – TVR), Jamie Oldfield (Oldfield Racing), Kodee Brown (McCorry Brown Racing Team) and Matt Goodlad (Daytona Racing), with Vosbergens other result of third place enough to qualify him from pole position once again.
He would be joined on the front row by Jay Cardy (Cardy Racing Components), who had a second and a third in his heats, while Goodlad and Warren Oldfield (Oldfield Racing) would fill out the second row.
Vosbergen would lead the field into the opening turn with Goodlad following him on the bottom into second while Cardy dropped to third.
Warren Oldfield and David Nylander (Nylander Motorsport) were right there until the field managed to catch Nylander and spit him out, leaving him with some work to do to get back in contention.
On lap three Warren Oldfield would come out of turn four on the curb and pass Goodlad to take second, setting out after Brent.
By this time Brad Blake was also in fourth having passed Cardy, with most of the field running the low line.
Lapped traffic would come into play on lap six, with Warren slotting in behind Brent and like a dog with a bone, he would not let go, while Goodlad was not far behind, the top three having broken away.
Out of nowhere Goodlad found some pace, closed the gap and ducked under Warren in turn four on lap ten, the same place he was passed himself before, seeing Goodlad back in second.
A lap later the yellows came on as Veronica McCann (Veronica McCann – Red Hot Racing) who had raced from position seventeen to thirteenth, came to a stop in turn one after contact with Freddy Kinsella (Team Green Racing).
The restart saw a number of cars making contact through the field, but all were able to continue, with Vosbergen still leading Goodlad and Oldfield, while Blake was still fourth and Jason Oldfield the big mover into fifth after starting tenth.
He would continue this momentum, pulling an inside move on Blake to take fourth on lap fourteen, the field still running nailed down to the curb line.
Vosbergen was well ahead at the halfway point, nearly three seconds in front of the rest of the field.
Again, Vosbergen encountered lapped traffic, but it didn’t seem to slow him down, while the battle for second was nose to tail between Goodlad, Oldfield and Oldfield as they each waited for the other to make a mistake.
Despite a final yellow light on lap twenty-three for Laura Byrnes (Red Shamrock Racing) who spun coming out of turn two, the order at the top remained unchanged, Vosbergen going on to claim his ninth career feature race win at the Motorplex venue, crossing the line nearly three seconds ahead of Goodlad and Warren Oldfield. Jason Oldfield and Brad Blake rounded out the top five. 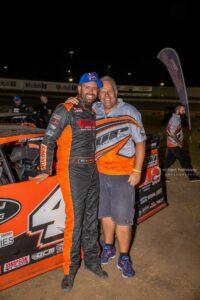