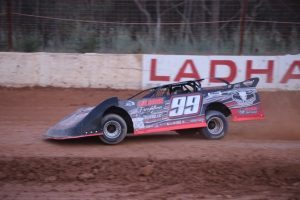 feature race for the year in his brand new Longhorn machine.

Halliday was at the front all night, winning both of his heats, claiming the Pancho’s Pole Position Award and then leading every lap of the thirty lap feature event to come home with maximum points.

As the feature race went green for the first time, Halliday and Goodlad would drag race through the first turns side by side until Goodlad got a burst of speed coming out of two, grabbing the lead down the back straight. However, just as the leaders were coming out of turn four, the yellows came on as Simon McNab and Daniel Ameduri spun together, while Ken Melvin and James Batley also spun to avoid.

The second start lasted longer and this time Halliday was on his game, getting the lead to head Goodlad on the opening lap while Jay Cardy and Brad Blake ran side by side for third behind them. Shortly after Blake would find some speed and pull away into a clear third spot.

Lapped traffic came into the race early, and while Halliday made short work of the first car to go a lap down, that same car then had a half lose just as Goodlad was coming through, seeing Goodlad go very sideways as he attempted to avoid, but somehow continuing on.

Behind them, a battle was developing between Blake, Cardy and Brent Vosbergen, the three running very closely as they crossed the line to complete five laps. Unfortunately it all came undone from here as Blake and Cardy made contact, Blake spinning, Michael Holmes and a number of other cars also getting involved behind them as they tried to avoid it and ended with Cardy infield with flat tyre while Blake was sent to the rear.

On the restart Halliday led away Goodlad and Vosbergen who was elevated into third after the demise of the other two front runners. Halliday didn’t take long to once again build up a solid lead, but it only lasted for two laps before the red lights came on for Veronica McCann, who after significant contact with McNab, ended up cannoning into the turn three wall, riding it and nearly flipping over before coming to a rest in the middle of the track.

Red Hot Roni emerged from her mangled mess of a machine shaken but unhurt, while McNab was disqualified for his part in the incident.

Once again the race would resume, but Daniel Ameduri would bring out the yellows shortly after as he slowed on the back straight only to fire up again and rejoin the field on the next restart, albeit at the tail.

Before a lap could be completed again the yellow lights came out, this time for the then fifth placed Lee Watt who had spun in turn two. He was unable to restart with what looked like steering damage to his immaculate machine.

The next segment of the race would be the longest and the final stanza, with Halliday again racing away from Goodlad. Over the final fifteen laps Goodlad would slowly reel Halliday in as Halliday got held up in lapped traffic while Vosbergen was doing a brilliant job in third place holding off the two more experienced competitors in Michael Holmes and Warren Oldfield, who had come from position twelve.

With five to go Halliday got through the traffic and broke away again, going onto record the victory, his second for 2017/18 and the first person to achieve multiple victories this season. Goodlad came home second in another podium appearance, while Vosbergen did a great job to hold on for third. Holmes, Oldfield, Blake, Ameduri, and James Batley rounded out the only other finishers. 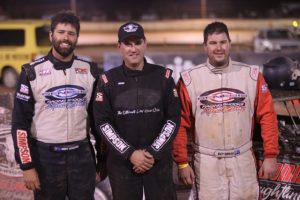 Courtesy of tonight’s results, Warren Oldfield and Brad Blake are now tied for the XLI Pro Dirt Series point’s lead, with Jay Cardy and Michael Holmes also tied for third, while Matt Goodlad is just two points behind them. It’s tight at the top!

There is once again no time to rest for the Late Models as they return to the high banks of the Perth Motorplex again this coming weekend, this time for the King of Kwinana event, doubling as Round Five of the XLI Pro Dirt Series.