One of the best things about Speedway in general is that it brings families together and helps them build stronger bonds as they work together on cars and of course celebrate the highs and stick together through the lows.

Late Models are no exception and the upcoming Australian Title will see many families in attendance, some from the other side of Australia.

At least four of those families will be racing together for the title weekend, with the Oldfield’s, Ludlow’s, Melvin’s and Pearson’s all fielding cars and being today’s nomination announcements!

Headlining the charge for today is of course the family of Oldfields. The three brothers Warren, Jamie and Jason are all racing the title event and all three have a legitimate claim to the win.

Warren has been having a great season so far, leading the Pro Dirt Series points and having claimed three wins, two seconds and a third place in features throughout the season. He also won the last show at the Motorplex and holds track records there, so will be a tough nut to crack. He has also finished second and third in the title even before so is hungry for a win and to put the coveted number one on his car.

Jamie Oldfield also has track records and has also claimed three feature wins this season, which along with two more podiums, have helped him to second place in the standings so far. He is another top contender and if past shows are anything to go by, he will be a red hot favourite. Having already won national titles in other divisions, Jamie will be hungry for the #1 in the Late Models and after two previous second place finishes he will not settle for second once again.

Although he hasn’t raced much this season, Jason Oldfield also returns to the track for the title. Driving the car that American visitor Jack Lee used in the Invasion tour recently, Jason raced to a fine seventh place, so as he gets more comfortable he is certainly going to be one to watch.

Another family of three competing in the title will of course be the Ludlow’s. Ben, Brad and Ryan have all nominated for the event and with their major sponsor Di Candilo Steel City also the major event sponsors, they will be hoping to have a good weekend.

All three have run limited campaigns this season, with Brad and Ryan both only doing only two shows, and Ben not having raced at all this summer. Despite the lack of seat time they should all be right on the pace, with title events always bringing out the best in the Ludlow clan: in fact when the title was held at the Perth Motorplex in the 2007/08 season Brad actually pipped Ben at the post to claim the title event!

Apart from that infamous title event both Ben and Brad have also finished third three times each, something they will be keen to avoid this time around as they each hunt for the win and if past experience is anything to go by, they will stop at nothing for the win, even fighting each other right to the chequered flag.

Another family heading across the Nullabor for the event are Victorian speedster father and son duo Cameron and Justin Pearson. At just sixteen years old Cameron claimed his first Late Model feature win in just his second ever show last year, while Justin won the Club Championship last season and podiumed in the Victorian Title.

The duo began in Junior Sedans and have developed their skills over the years and with this event their first trip to the West in Late Models, they will be looking to learn more and maybe even snag a good finish!

The final family in today’s release is the youngsters from Collie in Morgan and Alec Melvin. Although only relative newcomers to the division, the fast brothers have been around speedway all of their lives, like the Pearson’s also learning to drive in the Junior Sedan division before stepping up.

Both have adapted well to the division, getting faster with each show and troubling the front runners on a regular basis. Morgan sits eleventh and Alec seventeenth in the Pro Dirt Series, with Alec also winning the Development Series. Morgan has said he will be thrilled if he can just make the A Main event, but if they have a little bit of luck, anything is possible and a strong finish is certainly on the cards for both youngsters.

So with these ten nominations now revealed, we have a total of twenty drivers already confirmed and rest assured, we aren’t even half way there yet, so stay tuned as tomorrow we release another group of drivers! 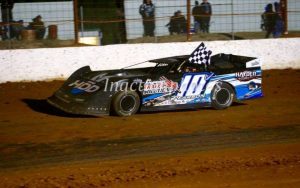 Picture: Cameron Pearson is one of the visiting drivers for the title weekend.