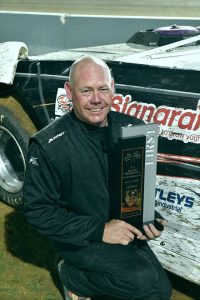 Since Late Models began there has always been a benchmark: that person who is the epitome of success and every other competitor is desperate to beat. A person that despite that desperation from their competition, is still able to rise up and claim results because they quite simply are one of the best.

For so long in the history of the division, that man has been ‘The 0 Show’ Brad Blake, and despite by his own admission not having the results he has wanted recently, the former multi time national and state champion is still one that everyone wants to beat.

Last season Brad started off strong, winning a heat, finishing on the podium three times, including one feature win, and led the Pro Dirt Series for most of the season, before bad luck struck him down.

“Last season certainly had its ups and downs,” smiles Brad. “In the first half of the season we were on the podium every week, then we struggled with track speed, but still led the series all the way until the second last round saw us with a broken diff, which killed our season right there.”

On top of that, Brad was also forced to miss the Australian Title, adding to the pain of the season that was.

“Having to miss the Australian Title really hurt me personally as National Titles are a personal goal of mine,” he muses.

That being said, being the consummate professional he is, Brad has now put that all behind him and is now looking forward to enjoying his racing this upcoming season.

“Our plans for this season are to take it as it comes and try enjoy what racing we have left, as Allan and I are not spring chickens anymore!” laughs Brad. “My job is very demanding and doesn’t allow for much race shed time, so these days I find myself not taking the risks or risking hurting the car because I’m always thinking I haven’t got time to fix it!”

The team will race as many events as time and dollars allow for, but one thing that is clear, is that both Brad and father Allan still have the passion for racing.

“A huge thanks as always to my dad, as he still has the passion to get the car ready week in week out even though he’s losing his marbles!” says Brad with a grin. “I also have to thank my sponsors Bunbury Honda, the Jones Boys, Signarama Burswood, Heatley’s Bunbury, Moyle Engines and Moyle Raceparts.”