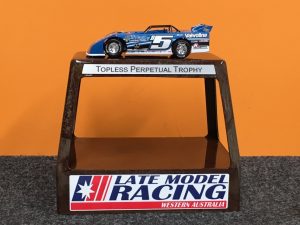 For the first time in a number of years, the Late Models will this weekend go topless!

Of course, this has many connotations, but we can assure you that this will be way better than anything topless you have ever seen before, and certainly doesn’t mean our drivers will be walking around with no top on, rather the Late Models will literally take the top panel work off their cars for this very special event!

This concept has proven to be very popular in the United States and this weekend will see seventeen Late Models powering around minus their roof panels, allowing the crowd to really see exactly what is happening inside the cab as the drivers man handle their beasts around the track.

Not that the event needs it, but there is certainly some extra spice added to the event as it will be another round of the 2015/16 Racin’ Tyres and Accessories Pro Dirt Series and although Warren Oldfield has a clear sixty five point advantage, there is a massive battle for second place.

Jamie Oldfield and Kye Blight are currently tied on points for second, while Jay Cardy is just one point behind in fourth. All four have nominated for this weekend and will be desperate to gain an advantage as the series begins to come to a close, so this is one battle you won’t want to miss!

Marc Giancola won the last race meeting at Bunbury, being joined on the podium by Brad Blake and Kye Blight, and again all three are nominated for this weekend, so will be hoping to take their good form into the topless race.

Father and son duo Craig and Brent Vosbergen would love to bounce back into form in a big way, so will be two to watch this Saturday night, while Brad Ludlow, Veronica McCann, Mick Clune and David Nylander are all also making their first on track appearances for a while.

Add in a whole host of others drivers and we are set for a stellar event as the Late Models go topless!

Make sure you are at the track this Saturday night, but please ensure that unlike our Late Models, you are wearing your top! See you trackside!