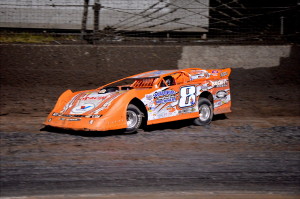 It’s nearly Christmas time and what better way to celebrate the festive season than watching a huge field of thundering and lightning Late Models race around the high banks of the Perth Motorplex?!?!

This weekend will see all those wishes come true as Saturday night plays host to round 7 of the Racin’ Tyres and Accessories Pro Dirt Series at the Perth Motorplex, with a huge twenty four cars nominated for the nights action!

Kye Blight goes into the show as the last start winner after a great drive in Kalgoorlie a fortnight ago saw him claim him first Late Model feature race. High on the confidence that win brings, he will be pulling out all the stops to go two from two.

Of course he will have a snarling pack of other drivers who, despite the festive season being one of giving, will not be giving him an inch. Drivers the ilk of Brad Blake, Marc Giancola and Jay Cardy have been knocking on the door of a feature win all season and this weekend may very well be the time they succeed.

To succeed though they will also have to get past two very big obstacles, those of Warren and Jamie Oldfield who so far have each claimed a win at the Motorplex this season. Whenever they rock up to a track all other competitors are put on notice and one would be foolish to think that this weekend would be any different.

Michael Holmes is another who has claimed a feature win this year and he will be sure to fight hard to claim a second win this season.

A whole host of other drivers are in the field, including Morgan Melvin, Jamie Moon and Paul Stubber, not to mention names like David Nylander, Rob Galloway and Willy Powell who are all making their first appearances of the season.

Another man making his first appearance this season will be Craig Vosbergen back in the familiar #8 machine. After having some time off Craig is sure to have lost none of his race fitness and skill, so will certainly be a contender come feature time this weekend.

If we look at the season long championships this far, Warren Oldfield is leading both the Racin’ Tyres and Accessories Pro Dirt Series as well as the Perth Motorplex Track Championship. Due to his consistently strong runs Warren leads the Pro Dirt Series over Jay Cardy and Kye Blight, while the Track Championships sees him hold a slender two point lead over brother Jamie, with Marc Giancola, Jay Cardy and Kodee Brown all within twenty points of Warren.