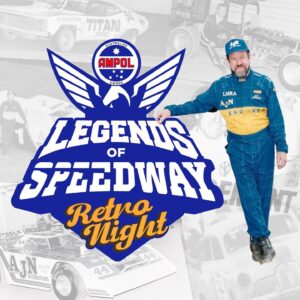 For twenty-five years the WA Late Model Championship has been a must win event and this Friday and Saturday nights that tradition continues as (fittingly) twenty-five drivers fight it out for the right to be Champion!
Proudly presented by the team at ABN Trade Mates, this weekend will be a not to be missed meeting and with the Late Model teams coming into the show fresh off a few weeks break, everyone is set to be giving it the best shot possible to earn the right to be #1!
Adding some extra spice to the night is that it will also be the Legends of Speedway night at the Perth Motorplex, celebrating the heroes of the past and for Late Models that means acknowledging inaugural WA Late Model Champion AJ Nylander (Nylander Motorsport)!
AJ was one of the pioneers of the division and is still involved heavily today, so it is only fitting that this weekends race meeting is held in honour of him.
Defending WA Champion Warren Oldfield (Oldfield Racing) comes into the show after a tough start to the season by his own lofty standards, but he has still done enough to be sitting second overall in the Pro Dirt Series points score. That series will take a slight back seat for Oldfield this weekend though as he looks to grab his first Pro Dirt feature race of the year and retain his Title.
Brad Blake is hoping to bounce back this weekend after a rough time at his last show and grab a record tenth WA Title, as well as add to his own record-breaking number of feature wins at the Perth Motorplex venue, while fellow former champions in Jamie Oldfield (Oldfield Racing), Brent Vosbergen (Team Vosbergen Racing – TVR) and Kodee Brown (McCorry Brown Racing Team) will also be keen to grab another title trophy to add to their cabinets.
Jamie already has two and was second here last season, while Vosbergen claimed his first in the 18/19 season and would love a second win to equal his father Craig’s efforts. Brown, who won the last Pro Dirt feature at the Motorplex venue, grabbed his first WA Crown in Albany the same year he won his National Title so he too will be fighting hard to get back on top of the podium.
Names like Jay Cardy (Cardy Racing Components), Matt Goodlad (Daytona Racing), Brad Ludlow (Ludlow Racing) and Michael Holmes (Michael Holmes Racing) have all featured on the podium in minor positions in years gone past and would love to add a first place WA Title trophy to their mantlepieces at home, while others including Joe Chalmers (Team BCM Motorsport:), Daniel Ameduri (Ameduri Motorsports) and Veronica McCann (Veronica McCann – Red Hot Racing), plus David Nylander (Nylander Motorsport), who will be running a special throwback paintscheme, will be hoping to stamp their names in the history books for the first time this weekend.
We also welcome back veteran competitor Willy Powell (Willy Powell Racing Australia) to compete in the Title event this Friday and Saturday nights, with a number of drivers also coming from Kalgoorlie and Esperance to compete once again.
The event will be run with the same format as the Late Model Nationals earlier in the year, with qualifying taking place this Friday prior to two qualifying heats per driver. Points will be tallied and drivers split into odds and evens for two feature races on Friday, with the finishing orders of these features setting the heat grids for the next nights racing.