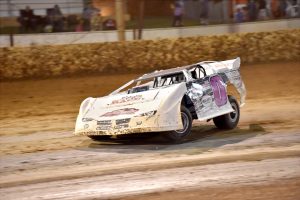 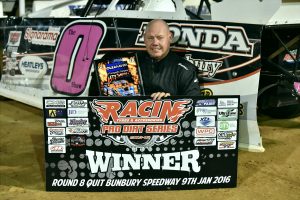 Hometown hero Brad Blake has finally broken through for his first win of the season so far as he last weekend claimed the feature race at Bunbury Speedway.

Jay Cardy, who started off pole courtesy of a win and a third place in the heats grabbed the lead early in the feature, a position he held for the first ten laps. Blake soon made his presence felt and then moved through into the lead, which he held for the remainder of the race.

Cardy backed through the field after his tyres began to wear, while Brent Vosbergen began to make a late race charge, moving into second and setting out after Blake.

With the race going nonstop for the twenty five laps, Blake ended up being simply too good, claiming a popular win ahead of Vobergen while Warren Oldfield managed to hold on for third place.

With the race meeting also the final round of the Quit Bunbury Speedway Cleanaway Track Championship, it was Marc Giancola who held on for the series win ahead of Kye Blight by a margin of just eight points. Jay Cardy was third overall, with Paul Joss and Brad Blake rounding out the top five.

The final two rounds of the series get underway this weekend, with the Perth Motorplex hosting the silver cup on Saturday the 23rd of April, which will be followed by the venue hosting the Grand Finale event on the 30th of April.

Stay tuned as tomorrow we release the field for this weekend’s event. 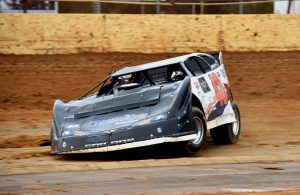