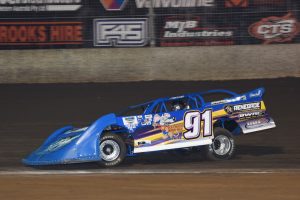 The Late Model express train continues this weekend with the third weekend in a row of racing, this time at the Make Smoking History Bunbury Speedway for Round Four of the Carbusters Late Model Pro Dirt Series.

So far the event has attracted seventeen nominations, with four drivers making their first appearances of the season and all the regular championship contenders ready to go at it once again.

Series leader Michael Holmes has won at Bunbury before and will be doing all he can to not only maintain that overall lead, but also claim his first feature win for 2019/20. There have been three winners from three features so far and Holmes’ results have only been improving to a podium finish at the last show, so this could be the night he breaks through.

Warren Oldfield comes into the race as the last start winner and after such a strong feature performance last weekend, will be looking to continue that form and build on it. Oldfield has been consistently quick and sits second overall in the championship but with just two points behind himself and Holmes, Oldfield will certainly be looking to close that gap.

Paul Stubber currently sits third in the series standings having claimed a consistent three fifth place feature finishes in the opening three rounds. Despite showing significant car speed Stubber hasn’t quite been able to break onto the podium and will now be keen to get some more results further towards the pointy end of the field. With Bunbury being his home track, this certainly may have some bearing on his result and confidence come feature time!

Brad Blake is currently fourth overall in the series and that is not a position he is content with. ‘The 0 Show’ won the last Late Model feature event at Bunbury last season and being his home track, plus considering the form he has been in lately, will be considered a tough one to beat this Saturday night.

Marc Giancola and Jay Cardy have had quiet starts to the season which is something that they are keen to put behind them and start getting runs on the board, while others like Freddy Kinsella, Daniel Ameduri and Veronica McCann have been consistently getting quicker and scoring some solid results, Ameduri in particular impressing many with a strong Round Three overall and a fourth place finish in the final.

Rookie Lee Redmond has also been quietly going about his business and will this weekend make his first appearance at Bunbury in the Late Model. He has plenty of laps under his belt at the venue so it shouldn’t take long for him to acclimatise and continue his development in the Late Model ranks.
Kye Blight, Joe Chalmers and Cody Avins all suffered engine dramas in the early stages of the season and as a result missed shows. This terrific trio have nominated for this weekend’s event in Bunbury so with a little bit of luck, they will have completed repairs and be ready to hit the track set to rumble Saturday night.

David Boyes has nominated for his first Carbusters Pro Dirt Series round ever and is making the long trip down from Kalgoorlie, while Aydan Trewern will be driving up from Albany, also in his first round of the season. In contrast Ken Melvin makes the relatively short trip from Collie and all three will be looking to turn some heads in their seasons debut, while Jayden Meckenstock has also been experiencing issues that kept him off track and he too is hopeful of making his first appearance of the season this Saturday night. 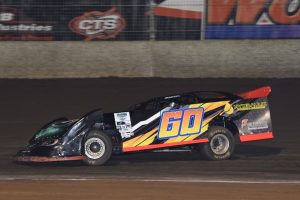 It is sure to be a great night of Late Model competition and with the possibility of a couple more nominations, the show becomes even more enticing, so make sure you make the short trip down the highway to see the thunder and lightning Late Models compete in Round Four of the Carbusters Pro Dirt Series!

Pics: Jayden Meckenstock is hoping to be back on track this weekend at Bunbury while Michael Holmes is looking to maintain his series lead. Mel Parker Photos.