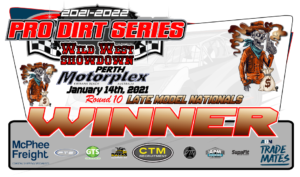 It has been a massive season for the Late Models so far and this weekend it gets even bigger as the annual Late Model Nationals again returns over two nights, doubling as the final two rounds of the Wild West Showdown and as rounds of the season long Pro Dirt Series.

With so much on the line, drivers are going to be fighting extra hard to get towards the front and the twenty-four nominees are sure to put on a show as they battle it out.

Cardy has recorded a sixth, a fourth and an eighth in the three rounds so far to be leading the series, with three heat wins also helping boost his point score. 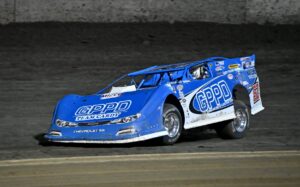 Ameduri has also been having a consistent run, recording two fourths and a fifth-place finish so far and he is keen to break through for another podium finish this weekend.

Vosbergen has claimed two feature wins and four heat race wins, but a DNF in the opening round on New Years Day hurt his points. He has since been able to claw back the gap and the top two will have a hard time holding him off!

Brad Blake and Warren Oldfield round out the top five on points so far, with three second place finishes between them and two big crashes costing them each a spot further up. Both have worked hard to repair their cars and would love a good finish across the next two nights to reward their efforts.

Joe Chalmers, Veronica McCann, Michael Holmes, Jamie Oldfield and Rod Musarra round out the top ten in the Wild West Showdown points so far and all have shown significant speed at different points (four heat wins and three third place feature race finishes between them), so could well build on their standings with another good points haul across this weekend. 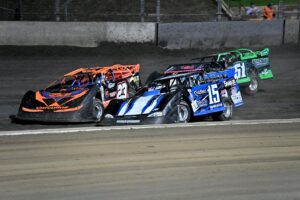 We welcome back Luke Halliday to the field this weekend after a few meetings absence, while names like Warren Minshull, Cody Avins and Jai Mazzini are back in the field after missing the Ellenbrook meeting and are looking forward to getting their names up in the results once again.

The format for this weekend will see the Late Models recording qualifying laps on Friday night which will place them into the two rounds of heats for Friday night, a total of six heats on the schedule. The points will then be calculated from qualifying and heats to split the field into two feature races for the Friday night.

The finishing positions from the night one feature races will set the heat grids (one round) for the Saturday night show, with total points across both nights from qualifying, heats and feature races setting the all-important grid for the thirty-lap feature on Saturday night to determine who will win the Late Model Nationals!

Two nights of red-hot racing action to determine who the winner of the Showdown is? Now I’d like to see that!