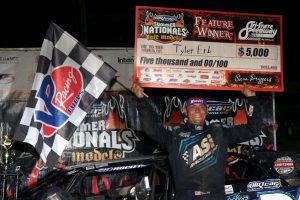 New Wavery, Texas young gun Tyler Erb is ready to make his first ever appearance to the Land Down under when he hops on board the HDD Racing Rocket XR1 Chassis supplied by the Pearson Family from Victoria for this years Di Candilo Steel City USA Invasion tour commencing at the Perth Motorplex for the Late Model Nationals on January 13 and 14.

Tyler began his racing career at the age of 14-years-old in 2011. He first raced in the Hobby Stock division and he enjoyed considerable success as he won nine features. His final stats in the Hobby Stock included 24 top three finishes and 28 top ten finishes. But it was by the age of 15 where Erb saw himself behind a wheel of Super Late Model and only in his fourth start in the division he recorded his first victory at the Jones Motor Speedway in Chatham, Louisiana.

Erb, who turned 21 on New Years Day will be getting set for another attack on the World of Outlaws circuit for 2018 after coming home with the rookie of the year honours and a 12th place points finish in 2016 and completing compete in a total of 82 events 2017 visiting victory lane three times. Erb collected 45 Top-10 outings and 19 Top-5 finishes. He also finished his second year following the World of Outlaws Craftsman Late Model Series sixth in points.

Pairing alongside team mate, young Victorian Driver Cameron Pearson for the entire Di Candilo Steel City USA Invasion Tour that also hits the Quit Collie Speedway on January 19 and Albany’s Atwell Park Speedway on Saturday January 20, both these young stars of the future will be ones to watch in the point race.