This weekend will see the now annual topless race for the Late Model division and with a cool $5k on the line to win courtesy of the event sponsor Di Candilo Steel City, every single driver is sure to be fighting tooth and nail to cross the line first in the forty-lap feature event.

A good field of twenty cars have nominated for the show, the first since the Krikke Boys Shootout a few weeks ago and also doubling as Round Ten of the Sims Metal Management Late Model Pro Dirt Series.

Coming into the event as a hot favourite will be the veteran driver, ‘The 0 Show’ Brad Blake who is hunting for his third win on the trot. Two podium finishes earlier in the season have been followed by recent wins at both the Perth Motorplex and Bunbury Speedway and for the first time in a while, Blake is keen to grab a third win, but will be pressured hard by a whole field of other snarling competitors. Should Blake win this weekend it will be his thirty sixth all time feature win at the Perth Motorplex and put him just one behind the all time most wins of Scott Glazebrook at the venue, not to mention help his points in the overall series.

Interestingly, if we look at the Perth Motorplex stats a little further we can see that the man Blake is currently tied with for third place in the Sims Metal Management Late Model Pro Dirt Series is Marc Giancola, who also has twenty four feature wins at the Motorplex, placing him equal fifth on the list. Should he be able to break through for his first win this season, he would move into fifth outright overall, not to mention give his season points a much needed boost. Coming into the round Giancola is equal third with Blake, the duo just nine points shy of second placed Jay Cardy and every chance of making some moves with only a couple of rounds left in the season.

Cardy is another keen to break through for his first win this season and coming into this event not just second in overall points for the Pro Dirt Series and third in the Motorplex Track Championship, he is also the defending champion of this Topless race, having claimed the event twelve months ago. Indeed last years event was a war of attrition, with just five finishers, but Cardy was able to outclass them all and would love to record his first feature win for season 2018/19 to go with the three podium finishes he has already garnered this season.

Coming into this event Michael Holmes is also in good form, leading both the Perth Motorplex Track Championship and the Pro Dirt Series, not to mention having grabbed one win and four other podium finishes so far this season. Holmes also came home in third in the Topless race last year and is now ready to roar with his roof off once again this Saturday night.

Possibly the man with the biggest will to win this weekend will be youngster Brent Vosbergen. The hot shoe has had a tough time recently, with his grandfather, the legendary Big Bad Bert Vosbergen passing away. Brent will be fired up to grab the win in Bert’s honour and what better way to do it in a massive race with a huge payout aboard a car with the very number his Grandfather made famous!

Australian Champion Paul Stubber, last years Pro Dirt Series winner Warren Oldfield, the ‘Black Knight’ Ryan Halliday and the ‘Katanning Kid’ Kye Blight have all tasted feature race success at the Motorplex before and will be keen for a good run while others including Simon McNab, Jayden Meckenstock and the returning Veronica McCann will also be keen to get their names up in lights come feature race time.

Late Models will receive Engine Starts prior to qualifying which will also sort them into their heats. Points from qualifying and the heats will grid them up for the all important feature event, with the pre events, including qualifying, scheduled to get underway at around 5.30 for the Late Models while our first heat is scheduled for around 6.45pm.

Make sure you don’t miss this one as it’s not often that our Late Model drivers go topless in the Roof Off Roar! 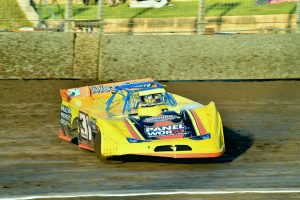 Pictures: The Late Models are topless at the Perth Motorplex once again! Pics Courtesy Peter Roebuck.