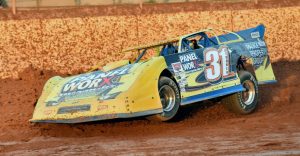 Paul Stubber last night wrapped up a very successful weekend of racing and backed up an impressive second place in the WA Title b claiming the feature win at Esperance Speedway.

Although it was only a small field, Stubber’s win, his first feature victory in Late Models, was hard fought as he held out veteran competitor Brad Blake and eastern state visitor Ben Nicastri to cross the line first in the twenty five lap feature event.

Despite the top four cars fighting a close battle the whole race, surprisingly the top four positions actually didn’t change for the entire race, Stubber leading from flag to flag, while Blake was unable to advance from second.

Ben Nicastri and Stuey Hill came third and fourth respectively despite it being their first look at the Esperance track, while Michael Holmes worked his way into fifth after a good battle with the remaining cars.

Jarrin Bielby and Chris Pavlovich rounded out the finishers while Jayden Meckenstock was unlucky to not be able to complete the distance.

Earlier in the night Brad Blake claimed the opening heat while Paul Stubber claimed the second.

The Late Models will now head home to regroup after a full on fortnight of racing, with the next event only days away. Round ten of the Racin Tyres and Accessories Pro Dirt Series will be held this Saturday night at the Perth Motorplex, with the full nominations release and preview coming later this week.

Finally, we would just like to say a huge thankyou to all the drivers who participated in the last fortnight of racing, especially those who did all four nights of racing and the interstate drivers who made up such an important part of each show.