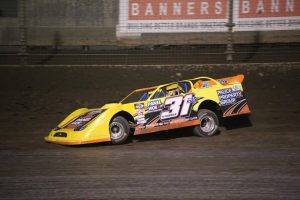 Paul Stubber has tonight had one of the best nights of his Late Model career, going through undefeated in the opening two rounds of the WA Late Model Title heats to lead the points after night one and also grabbing the win in the rescheduled General race in honour of John Day!

Stubber would start from position four in the feature, but it was front row starter Brent Vosbergen who would get the better of pole position man Brad Blake on the start to grab the lead. Stubber, starting directly behind Vosbergen, would follow him through into second while Blake, Warren Oldfield and Jay Cardy were right there as they too looked for a way through.

Stubber looked under Vosbergen but initially couldn’t make the move stick, choosing instead to wait, stalking his prey until eventually he made the move on lap six.

Shortly after the yellows would come on as Daniel Ameduri found himself facing the wrong way going into turn three.

Stubber would pull away from Vosbergen at the restart, with Oldfield shortly behind him while a pack of four cars involving McCann, Blake, Halliday and Cardy battled for fourth. Shortly after Kye Blight, who had come from the rear of the nineteen car field, Matt Goodlad and Michael Holmes would also get involved, making it a battle of seven cars looking for fourth.

Oldfield moved into second as Vosbergen began to get swallowed up by the snarling pack, then all of a sudden he spun down the front straight to bring out the yellows with ten complete.

This meant that the field would once again be forced to line up single file, Stubber to lead away Oldfield and Veronica McCann on the restart.

Cardy would go high and look for a way past McCann on the restart, taking several attempts but eventually making the move stick on lap fourteen, while Blight would split the middle shortly after, with McCann low and Cardy high, the trio three wide as they battled for third.

Blight would get the best of that battle then work the highline to move around Oldfield for second on lap seventeen.

Up front Stubber looked to be pulling away but Blight was on a mission, narrowing the gap every lap and then making his move under Stubber for the lead when Nathan Callaghan spun to bring out the yellows with twenty complete.

Stubber would lead away Blight, Oldfield, McCann, Cardy and Halliday, with Stubber quickly away while Blight chased hard. Behind them McCann was looking for a way under Oldfield, the duo side by side a number of times in the ensuing laps.

All of a sudden Cardy and Halliday put them both under siege but with just one more lap complete the yellows came on for Simon McNab who found himself in the turn one wall.

Again Stubber would lead away Blight, and Oldfield, while Halliday would shortly after move into fourth passing Cardy and McCann all at once. At the same time, a determined Stubber would pull away, working his way through lapped traffic as behind him Blight chased and the battle for third raged.

Unfortunately for Oldfield, with just a lap to go he slowed dramatically with a blown tyre and was passed by Stubber in the final corner to be a lapped car and record a ninth place finish.

Stubber meanwhile would become the eighth different feature winner of the Late Model season, recording his second career Motorplex win as he crossed the line ahead of a hard charging Kye Blight and Ryan Halliday.

Courtesy of his previous heat results Stubber also leads the points going into the final night of the 21st Annual WA Late Model Title presented by Di Candilo Steel City. He is followed by Craig Vosbergen and Kye Blight, while Matt Goodlad and Ryan Halliday round out the top five. Full points are listed below.

Full XLI Pro Dirt Points after Round 12 will be posted tomorrow morning, but at this stage it is Jay Cardy who has retaken the lead in the XLI Pro Dirt Series with Oldfield now in second while Michael Holmes is in third.

The thunder and lightning Late Models return to the Perth Motorplex tomorrow night with one more round of heats before the feature event to find out who is going to be crowned the WA champion for season 2017/18!