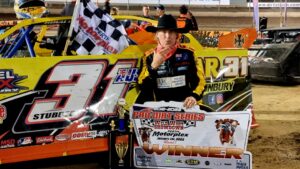 Tonight at the Perth Motorplex, Paul Stubber put in an incredible performance in the feature race to move his way forward from position
nine, hit the front on lap twenty eight and then race away to claim the win in what was the opening round of the Wild West Showdown!
After the six heat races were run and won, it was once again Brent Vosbergen (Team Vosbergen Racing – TVR) who claimed pole position after two heat race wins. He would be joined by Jay Cardy (Cardy Racing Components)(a win and a third), while the second row was made up of Warren Oldfield (Oldfield Racing) (a win and a fourth) and Daniel Ameduri (Ameduri Motorsports) (a second and a third in the heat races).
The thirty-lap feature was set to be a thriller and it certainly didn’t disappoint, with Vosbergen leading into the opening turn followed by Cardy. Vosbergen bobbled slightly through turn two and allowed Cardy to close back in, but he wasn’t able to make the pass.
Behind them cars were going every which way, Matt Nylander (Nylander Motorsport) continuing the form that netted him an earlier heat win and again fitting through some tiny spaces in the middle of the pack!
Vosbergen began to pull away as Cardy started to come under pressure from Warren Oldfield, with Vosbergen then hitting lapped traffic on lap five, just as Oldfield made the pass stick on Cardy.
Vosbergen and Oldfield then began weaving their way through traffic, with Cardy, Ameduri and Kodee Brown (McCorry Brown Racing Team) not far behind in what was beginning to resemble peak hour on the Kwinana Freeway.
Ameduri closed in on Cardy on lap twelve, dived underneath and took third momentarily before Cardy’s momentum allowed him back by, while just behind them Brad Blake was now making his presence felt as he passed Brown for fifth on lap thirteen.
Shortly after, Stubber would do the same for sixth until the unthinkable happened, Vosbergen slowed with what appeared to be a tyre issue and headed infield, the first time this season he has not finished on the podium.
With half the race now completed, fifteen laps remained, Oldfield leading Stubber, Ameduri and Cardy on the resumption of the race, but as is so often the case, restarts breed restarts.
Blake passed Ameduri for third on lap eighteen, with the yellows on shortly after for Damian Hudson and Greg Horan who found themselves locked together in turn three, while next up was a big pile up that began with a couple of cars colliding and ended with a number of cars with damage and in particular an irate Michael Holmes (Michael Holmes Racing) on the infield.
The race resumed once again before again the cautions were out for a spun Nathan Richards, and it was Joe Chalmers (Team BCM Motorsport:) who took the opportunity the restart presented, racing his way into fourth.
In the closing laps third placed Blake would be right on second placed Stubbers tail as Oldfield raced away up ahead, Stubber touching the wall and getting Blake excited as he continued to look for a way by.
With just three laps to go the yellows came on once again, this time for a slowing Rod Musarra (Rod Musarra Racing #12), and it was while under caution that the race changed once again with leader Oldfield going up in a massive cloud of smoke.
This would see Stubber inherit the lead on the restart ahead of Blake, Chalmers, Ameduri and Brown and Stubber didn’t need to be asked twice, racing away like a bullet out of a gun to lead the final three laps and go on to win the race. 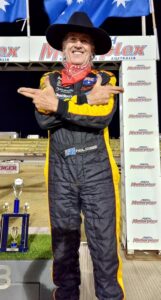 This would be Stubbers sixth Perth Motorplex feature race win and the perfect way to start the Wild West Showdown Series. He would be followed across the line by Blake, with Chalmers getting his second podium finish in a row for third. 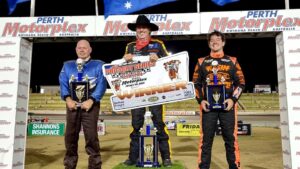