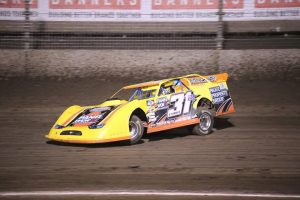 Stubber was all class, surviving an early race onslaught from Craig Vosbergen who led for much of the opening half of the race, making his move to claim the lead and then racing away from the rest of the field to record the win in the 30 lap WA Title feature event.

On the initial start to the race Vosbergen got the jump on Stubber but back in the pack a few cars came together coming out of turn two including Jamie Moon, Mick Comley, Daniel Ameduri and Willy Powell to set up a complete restart, with Comley tacked onto the rear at the restart.

The second start saw Vosbergen again take the lead from Stubber with Halliday settling into third, before another incident back in the pack, this time in turn four, saw Joe Chalmers spun facing the wall after hitting it, bringing the yellows out with one lap complete. Mazzini was also involved while as the yellows came on a number of cars including McCann, Callaghan, Holmes and Ameduri spun together in turn two.

This time the field would line up in single file for the restart, Vosbergen leading away. Stubber and Halliday chased hard while Goodlad was looking to pass Oldfield for fourth place.

Vosbergen made his way into lapped traffic on lap six, and was working through cars with Stubber not far behind when the yellows came out again with seven complete after Willy Powell spun to a stop in turn two.

Stubber made the moves on Vosbergen on the restart but it didn’t pay off, allowing Halliday to close on Stubber and he began looking for a way through for second.

The top four cars moved away from the rest of the field while fifth placed Matt Goodlad came under siege from a snarling pack including Brent Vosbergen, Jay Cardy and Kye Blight who had moved his way to eighth from twelfth.

Just as the leaders came around to lap cars once again, Nathan Callaghan spun in turn four after contact with Ameduri, the yellows coming out with thirteen laps complete.

Once again Vosbergen led away but this time Stubber wasn’t letting him go without a fight, sitting underneath him, the duo side by side for the whole lap. Vosbergen found the accelerator pedal all of a sudden and pulled away from Stubber, while behind them Halliday, Oldfield, Goodlad and Vosbergen were spread out like the proverbial Brown’s cows.

Tenth placed Brad Blake was the next to bring out the yellows, the nine time WA Champion spinning to a stop in turn three with thirteen laps remaining.

Stubber again applied the blowtorch to Vosbergen on the restart, the duo side by side until Stubber made his move, diving under Vosbergen and grabbing the lead on lap nineteen.

Stubber made his way into lapped traffic once again by lap twenty two, surviving an altercation with a lapped car a lap later and then being forced to slow as the yellows came on for Jay Cardy who slowed suddenly with what looked to be terminal engine issues.

This would set up a six lap restart and the drivers were certainly not going to die wondering, a number of them throwing everything they could at their fellow competitors to gain positions.

Warren Oldfield made the move on Halliday to take over the third place running, Brent Vosbergen moved into fifth and Craig Vosbergen suddenly slowed with his own engine issues while in second; all the while Stubber pulled further and further ahead of the rest, going on to take the win from Oldfield and Halliday in what was another epic race.

Stubber was jubilant on the podium, thrilled to have claimed his first WA Title after having come so close previously.

The WA Title was also a round of the season long series and full XLI Pro Dirt Points after Round 13 will be posted tomorrow morning. Warren Oldfield however does lead the Perth Motorplex Track Championship with one round remaining, eighteen points ahead of Paul Stubber while Michael Holmes and Veronica McCann are tied for third place and Matt Goodlad is two points behind them in fifth.

The thunder and lightning Late Models now have a break before they return to the Perth Motorplex for the final night of racing for the season, with Powerpalooza II taking place on Saturday the 7th of April!