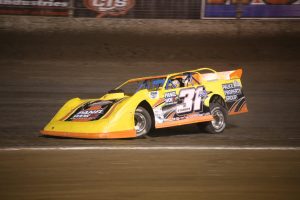 Paul Stubber is tonight back on top of the Late Model World as he claimed the thirty lap feature to win the City of Kwinana Cup and of course, Round Six of the Carbusters Pro Dirt Series.

Driving well all night, he was undefeated in every race he started with two heat wins setting up a pole position start en route to leading every lap of the feature.

As the race went green Stubber was straight into the lead as Marc Giancola, coming from position three and working the low line, was able to pass Stubber’s fellow front row starter Michael Holmes for second.

Warren Oldfield then made his presence felt, also using the low line to get underneath Giancola and take away the second place.

Stubber quickly built up a lead, 1.756 seconds ahead by the completion of lap two, while behind them a number of cars came together, seeing Jason Bond stranded on the infield in turn three and Nathan Callaghan spinning but able to continue on.

Stubber was 2.477 seconds ahead of second placed Oldfield by the conclusion of lap four as behind him Brent Vosbergen used the low line on Giancola to take over the third place running.

Callaghan then spun right in front of Oldfield as he was being lapped, Oldfield somehow able to avoid him and the yellow lights came on with five laps complete.

Stubber led away Vosbergen and Oldfield with Jay Cardy making his way through and grabbing fourth place on the restart.

Cardy then used the highline to move around Oldfield and take over third place, then setting out after Stubber and Vosbergen.

Although Stubber maintained his lead, it wasn’t as dominating as before, Vosbergen right on his tail and looking for a way through.

Stubber would lead away once more, with Cardy taking the opportunity to grab second place, while Holmes followed him through, relegating Vosbergen to fourth.

The yellows came on again as David Nylander had a moment on lap thirteen, with Willy Powell, Simon McNab and Freddy Kinsella all getting involved and heading to the infield together.

Stubber would lead the field away yet again as Cardy did all he could to get by, while Holmes held off Vosbergen for second.

Cardy was high, Stubber was low, but as the laps wound down cars began to spread out and passing became harder.

In the closing stages Holmes was able to close the gap on Cardy for second while Vosbergen was also right there, Holmes and Vosbergen both passing Cardy as the white flag flew.

Cardy fought back and repassed Vosbergen and looked for a way round Holmes, but fell 0.084 seconds short, Stubber officially the winner from Holmes, Cardy, Vosbergen and Giancola. Brad Blake, Veronica McCann, Jason Oldfield, Matt Amato, Lee Redmond and Jamie Moon rounded out the only other finishers.

After five weeks in a row of racing action, the Late Models will finally be able to rest for a week, before returning once again to the Perth Motorplex on the 7th of December for the John Day Classic, doubling as Round Seven of the Carbusters Pro Dirt Series. 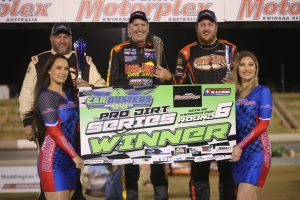