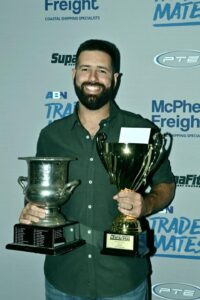 Last weekend at the Empire Bar, LMRWA drivers, teams, officials and sponsors came together to officially bring season 2021/22 to a close.
It was an awesome season, packed with highlights, great wins, big crashes and of course plenty of history created, all of which was celebrated on Saturday night.
The evening began with the Renegade Race Fuels & Lubricants Winter Development Series trophies from 2021 being presented.
Pat Van Brakel was officially third while CTM Recruitment Racing team driver Richard Wells was second.
“A big thanks to the series sponsors for their efforts,” Richard said from the podium, “and also thanks to the old boy for all he does, as well as my crew guys and of course AJ Nylander for all his words of wisdom.” 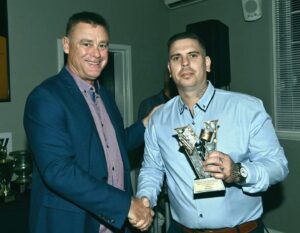 Greg Horan was then officially announced as the overall winner.
Next up was the AJN Pursuit of Excellence Award, with AJ and Heather Nylander (Nylander Motorsport) presenting the trophy once again.
“It was definitely tough this year because the racing so amazing,” said AJ, “but this year we have picked a man who travelled a lot, always had a lot of fun, puts a show on, leaves nothing in the tank and is a real character. Congratulations to Kodee Brown!” 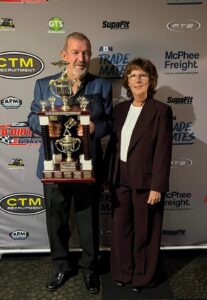 Unfortunately Kodee (McCorry Brown Racing Team) was not able to be present at the celebration so we will get the trophy to him as soon as possible!
Next up was the Quiet Achiever award and Freddy Kinsella (Team Green Racing) was a popular winner for his efforts on and off the track, despite the adversity his team faced throughout the season.
“Yeah, it sure was a tough year for us,” said Freddy. “We have officially broken everything this year: engines, cars and bones! Thanks to Craig Greentree, and we will be back with two cars next year, but for now, I am stoked to win this!” 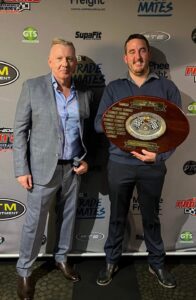 The award that everyone gets just one chance to win was next and it was Rocket Rod Musarra (Team Rocket) announced as the 2021/22 Rookie of the Year.
“I’m so happy to win this award,” said Rod. “There’s a lot of people who get behind me: my car owner, my sponsors, all my crew and also my wife who supports me 100% as well as all the other drivers who have been so 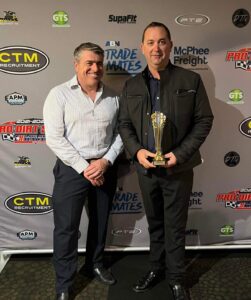 supportive. We will be back and hopefully even better next year!”
Joe Chalmers (Team BCM Motorsport:) was next to be invited to the front, receiving the Best Presented Car and Crew Award.
“A huge thanks to our sponsors and crew who have kept us on track this year, as well as to my Dad who started Team BCM all those years ago and supports us all so much. Also, I really owe this one to my girlfriend who is always working hard to keep it clean! Thanks to everyone for all the efforts they put in!” 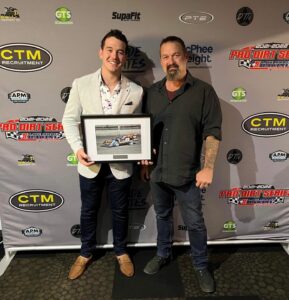 Chief Steward Jerome Sutton was up next to present his annual award. Normally he builds the suspense, but this year he announced the winner straight away as Brent Vosbergen (Team Vosbergen Racing – TVR).
He did this because, in his words, he has “never seen someone so young and quiet with such a good team that make smart decisions from the day he started in the development series. He drivers to suit track conditions, minimises his mistakes and is always in a position to capitalise on others mistakes.” 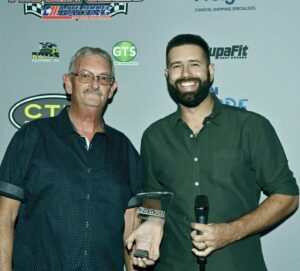 Brent was taken aback to receive the award. “A big thanks to Jerome for this one. I try my best not to hit others, sorry to anyone who I have though! A big thanks to all the other drivers, my family, my crew and all those that help for this year.”
LMRWA CEO Craig Vosbergen was up next to present the CEO Award.
To me this award is club related,” said Craig, “presented to someone who helps us do our job better and this year I have singled out one guy who went over and beyond what was expected that benefitted everyone in the club, and every person in this room enjoyed what they saw.
What he produced was amazing, so a big thanks to Jason Sutton.
Jason (Dirt Track Nutters) was speechless for once as he received the award, before gathering himself to thank everyone in the club. 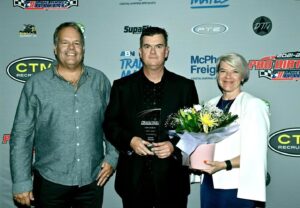 “What an honour this is,” he said. “A huge thanks to the committee: when I came on board I said we gotta do this right, and since then it’s been awesome to deal with everyone. Anytime I needed something from drivers or crew, or anyone, we never got one single no from anyone across the year. Thanks for believing in what we at DTN do and also thanks to Denise because without her I couldn’t do this. And officially, I will be back next year!”
Jason’s fiancé Denise was also acknowledged for her effort supporting Jason with the videos this year, including holding the camera and making him look good!
The final few awards would begin with the Drivers Driver. Voted on by his peers, Brent Vosbergen was elected the winner, saying it was nice to be recognised for doing the right thing.
The top twenty in the Pro Dirt Series were next to be acknowledged, receiving their prize money payouts. The top three would then receive their trophies.
Third place was Jay Cardy (Cardy Racing Components) after a consistent year.
“A huge thanks to my crew,” Jay began. “This is also a big moment for me as it’s the first night out without the kids in over a year, so big thanks to my wife for being so amazing! It has been a great year and thanks to all my sponsors. Now we need to just get that little bit better next year!”
Second placed Warren Oldfield (Oldfield Racing) would be up next. 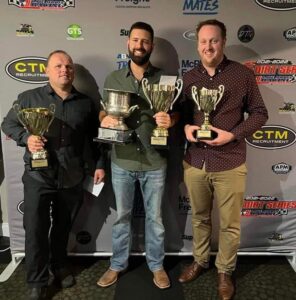 “A massive thanks to the whole team as without them we simply couldn’t get the cars on track,” Warren began. “Thanks also to Chantelle and Jack, as well as our sponsors because we truly couldn’t do what we do without your support.”
Finally, Brent Vosbergen (Team Vosbergen Racing – TVR) was welcomed back to the front and presented with the overall winners trophy.
“Again I have to thank my family for all they do. My wife is so supportive and I hardly see my baby so I’ll enjoy spending more time with them in the off-season! Congrats to Warren and Jay who fought hard all year, also thanks to our sponsors who are here tonight, as well as all all those who help through the week, we can’t do what we do without them. Also a massive thanks to my Dad for all his advice. This season was quite probably a once in a lifetime thing so we will be back next year but for now we are going to enjoy this one!” 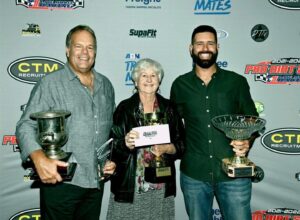 This would officially bring the 2021/22 season to a close and we can’t wait to see you back again next season to do it all over again!
Thankfully we have the Renegade Race Fuels & Lubricants Winter Series running through the off season to keep us all entertained, but finally, we have to once again thank all our 2021/22 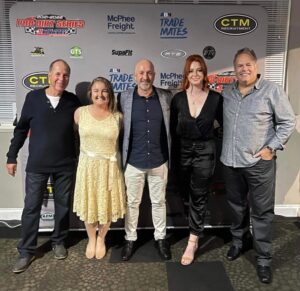