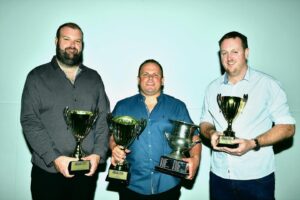 The 2020/21 Late Model season officially came to a close this weekend with the annual awards night celebrating the efforts of all those involved.
MC Gavin Migro opened the night with a pile of statistics that showed just how good the year was for Late Models, including big numbers of cars, individual highlights and of course mentioning those drivers who featured in the Perth Motorplex Track Championship (Warren Oldfield, Ken Macpherson and Jay Cardy) and those who polled votes in the prestigious Perth Motorplex Driver of the Year Award, Kye Blight, Warren Oldfield and Brad Blake.
The first official awards for the night were the presentation of the top three for the 2020 Renegade Winter Development Series. Pat Van Brakel was third, with his award accepted by Paul Stubber, while second placed Laura Byrnes was pleased to receive her trophy, thanking her Dad for being her rock.
“We took a leap of faith jumping into Late Models” she said. “It was something we always wanted to do and it’s awesome to be able to finally do it!”
Jeff Pahl was then announced officially as the winner, but being based in Kalgoorlie, he was unable to make the evening so his trophy will be sent to him soon!
The next award presented was the Quiet Achiever Award, with Scott Beattie announced as the recipient.
This was followed by Heather and AJ Nylander coming to the front to present the AJN Pursuit of Excellence Award. With last years awards night being cancelled they were finally able to present the 2019/20 winner, David Nylander, with his trophy before announcing the 2020/21 winner.
AJ said that the award was presented to a driver based on how they conduct themselves on and off the track, being an up and coming driver and one that is a credit to the sport, then announcing that Joe Chalmers was the winner. 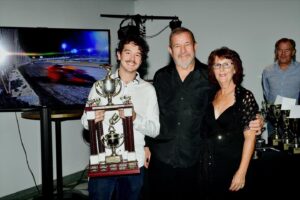 Joe thanked all those who support him, in particular his dad for all the work he does and the time he spends on the car.
Next up was the award that each driver only has one chance to win: the Rookie of the Year award. This year it was Laura Byrnes who grabbed the honour.
“Again a big thanks to my Dad and all our sponsors” she said. “ We will be back bigger and better for next year and I am so excited to battle it out again next season!”
David Nylander would be next up the front as he was announced as the Best Presented Car, as voted on by all drivers. His immaculate Nylander Motorsport #54 looked the part at each and every event and David was thrilled to be the recipient. 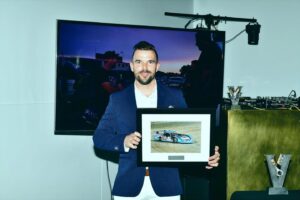 “We have a really good support network around us of sponsors and pit crew and we really appreciate that” he said.
Chief Steward Jerome Sutton would be next up the front, starting his speech by thanking all those who work behind the scenes, as well as to all the drivers for putting on a great show at each and every show.
He then discussed the criteria for his award, indicating that he spoke to the recipient a number of years ago, saying that if he smoothed out he would do better, and that the drivers response was that would never happen! Jerome then said the driver has gotten smoother and always knows his capabilities and will race within them, hence why Warren Oldfield was declared the winner, the first driver to win the award more than once.
Warren was pleased with the award, thanking Jerome and finishing by saying he loves Late Models and will continue racing as long as he can!
The Drivers Driver is a sought after award because it is voted on by peers. This year there was just one vote separating first from second, but Warren Oldfield was again declared the winner.
“Thanks to those who voted for me” said Warren from the front. “And also to those who didn’t, I still enjoy racing with you!!”
Paul Stubber then came to the front as a the outgoing General Manager to present the CEO Award.
He said that it had been a pleasure to be part of the committee and that he was looking forward to fresh faces on the new committee for next season. He then congratulated Joe Chalmers for being the CEO Award winner.
The final part of the night was the top twenty in the BGC Pro Dirt Series receiving their payouts, while the top three would also receive their trophies.
Third place was Jay Cardy who despite a tough year did enough to record consistent finishes.
“Thanks to everyone for another great year” he said. “Late Models are a great division. Thanks to Chris Cardy and Sterlo for what they do and I’m looking forward to next year!”
Second place was the impressive Ken Macpherson in what was his best season ever.
“This is such a good division to race in every week” he said. “A huge thanks to all the sponsors and those who help me every week, especially those who helped in the middle of the season with our unfortunate mishap and I look forward to next year!”
Finally, Warren Oldfield was presented with his winners trophy, the sixth time he has won the overall Pro Dirt Series.
“Thanks to everyone on the team and our sponsors. Especially to Nige, Chantelle and Jack for their efforts. Also thanks to Michael Holmes, it was an honour to drive such a nice car!”
This would officially bring the season to a close and now all focus turns to the 2021/22 season, and with a new committee to be announced soon and a whole heap of big shows set to be on the calendar, it is sure to be another awesome season!
Release by DTN Media.
Pics Courtesy Peter Roebuck.
Posted in news
Scroll To Top