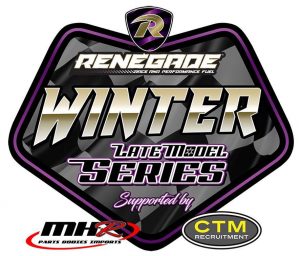 The opening round of the 2019 Renegade Late Model Winter Series will be held this weekend at Ellenbrook Speedway and with the series growing in stature each year, so does the nominations list.

A good field of fourteen drivers have nominated for the opening event to be held this Sunday at the Northern suburbs venue, with a good mix of veteran racers, rookie drivers and those who are dabbling in the Late Models after previously being in other divisions.

The more experienced drivers include Simon McNab, fresh off a win in Kalgoorlie and looking to get a handle on his machinery ahead of next years Pro Dirt Series and David Nylander, who once again slots back into the familiar #54 machine after some time out of the seat this past summer season.
Other regulars on the Pro Dirt Series include Dale Clark, this weekend driving the #0 machine instead of his regular #3, while Daniel Green will also return to on track action after very limited seat time in the season just gone.

Cody Avins made his debut in Late Models at the tail end of the season aboard the ex Mick Comley machine and was impressive, now taking the chance to get as many laps under his belt as possible in the new division, having come from Junior Sedans and Street Stocks. Matt Amato also comes from Street Stocks and will use this weekend to get more familiar with Late Models aboard the ex Oldfield racing machine.

Carl Pickersgill is also back in a Late Model after having caught the bug during practice sessions aboard wife Veronica McCann’s car, while the two car team of Rhys and Rob Wells have also nominated to have a run. They will be joined by Pat Van Brakel who is back aboard the Stubber #31 machine and Mick Andrews in the #48.

Add in Nathan Richards, son of ex competitor Phil Richards, former AMCA racer Graham ‘Jock’ Murray and of course former Sprintcar superstar Kris Coyle who is once again back behind the wheel of a thunder and lightning Late Model and it is sure to be a great show, the first of six rounds this winter season.

Drivers will race to the same point score of the Pro Dirt Series, with a number of contingency prizes also on offer including a bonus point for Pole Position (courtesy of Renegade) and Hard Charger (courtesy of DTN), a bonus prize courtesy of Michael Holmes Racing for the first development series driver across the line and a CTM Recruitment prize for a randomly drawn driver at each round.

Make sure you are at the Ellenbrook Speedway this Sunday for the first round of the 2019 Renegade Late Model Winter Series!

Picture: Cody Avins debuted in a recent Pro Dirt Series Round and will be back in action this weekend. Picture Courtesy Peter Roebuck. 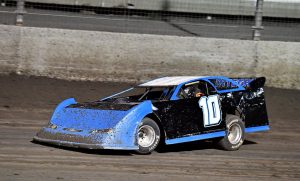