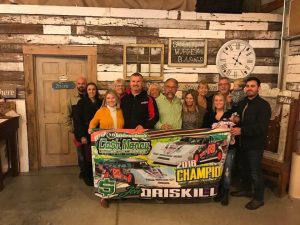 A year after returning to Australia as part of the 2017 Di Candilo Steel City USA vs WA Invasion Tour, Americans Joe Godsey and Jeff Roth have confirmed that they will indeed be heading back down under to compete in this year’s series!

The ultra-professional two car outfit have once again organized to bring some equipment out with them and are keen to get some more runs on the board, as well as really enjoy the Aussie way of life in what is essentially a racing holiday!

Jeff Roth was twelfth in the Invasion Tour series last time out with a best finish of eighth in a feature race amongst some other rough results.

Starting racing back home in America after a chance encounter in 1993, Roth has been racing for a long time now with much success. Concentrating his efforts on the MLRA in the American season just gone, Roth had some good results and came home eighth in the overall standings,

He is keen for some better results this time out in Australia and having more familiarity with the tracks here in WA after his first visit will certainly put him in good stead.

Meanwhile, his teammate Joe Godsey was eighth in the Invasion Tour series last year, with a number of heat wins and a best finish of sixth in the opening feature event.

The grandson of the legendary competitor Ray Godsey Snr and son of Ray Godsey, the name Godsey name has been synonymous with winning in race cars for many decades. Joe’s grandfather, Ray Godsey Snr began his racing career in the 1960s and is a member of the National Dirt Late Model Hall of Fame.

The younger Godsey, originally of Edinburgh, Indiana, began his racing career in 1994 running a Bomber car he built himself. Over the years he has raced for names like Tony Stewart, winning Track Championships and feature events in the UMP Modified division as well as championships and a number of races in the Super Late Models.

He has previously been the Rookie of the Year for the MARS West Dirt Car Series and this season, like Roth, also concentrated on the MLRA series, coming home eleventh overall.

This season sees the team again bringing equipment with them as they get ready to take on the best WA has to offer as well as fellow countrymen Billy Moyer and Tyler Erb.

Jeff is bringing a brand new Rocket XR1 chassis to refit all the gear out of the near new car that was unfortunately rolled over by Simon McNab at Bunbury last season. Joe meanwhile is racing a Swartz chassis, a chassis brand that is rarely seen in Australia, but a winning car nonetheless and should be very quick.

Simon McNab will continue to pilot his current car, the Rocket XR1 from last year that Joe raced, while the Roth Motorsports team will also be bringing a spares inventory, including no less than three spare motors!

The team will be on an extended stay, having a proper holiday in Australia and also taking in the Australian Title.  Joe and a crew member are already here in Australia while Jeff and wife Dana (and possibly another crew member, Derrick) will come out on the 16th. Both will be looking to have a run on Boxing Day at the Perth Motorplex, prior to getting underway for the Invasion Tour in a show that is already expected to be huge.

Joe’s wife Abbey and Jeff’s daughter Meghan fly out a few days before the invasion tour begins. Interesting to note is that Meghan is married to John Driskill, who raced for team Roth and won the Malvern Bank Cash money series in a Late Model.

The Roth Motorsports Team of Jeff Roth and Joe Godsey will join fellow Americans ‘Terbo’ Tyler Erb in the HDD Racing team and ‘Mr Smooth’ Billy Moyer, as part of the Paul and Alice Stubber team, and all the other local stars to compete in the four nights of the Di Candilo Steel City Late Model Invasion Tour (including the two night Late Model Nationals) at the Perth Motorplex on Wednesday the 9th of January and Saturday the 12th of January, followed by round three at the Make Smoking History Collie Speedway the Friday after (18th of January), with the final round at the Make Smoking History Bunbury Speedway the following night, Saturday the 19th of January. 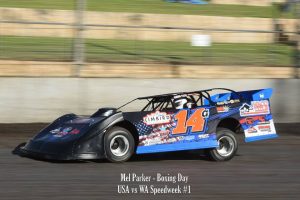