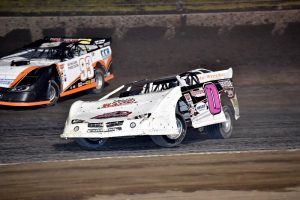 For the first time since the epic Australian Championship, the Late Models will this weekend return to the high banks of the Perth Motorplex and with another nineteen car field nominated, we are sure to have a great night of racing ahead of us.

One man who has been hot on his heels of late is Paul Stubber. Currently the WA number two after finishing just behind Brown in the State Title at Albany, Stubber went on to claim the feature win the next night at Albany. A few weeks ago he was the fastest man in official practice for the Australian Title and came home ninth in the championship final, so he certainly knows his way around the Motorplex track.

Brad Blake came second in the last race meeting for Late Models at Esperance, backing up two fourth place finishes in both championships. He is not one to settle for second best though and will be looking for a form of redemption this weekend as he hopes to go one better.

The Oldfield brothers Warren and Jamie haven’t had the luck they would desire in recent weeks, and after a dominating season up until the titles, will be looking to regain some of that form. The duo have claimed four feature wins between them at the Motorplex alone this season and consequently are holding down first and second in the track championship, a position each will be hoping to solidify with a win this Saturday night.

Michael Holmes grabbed a preliminary feature win last weekend, while Jay Cardy, Marc Giancola, Ryan Halliday and Kye Blight have all had podium finishes at the Motorplex this year. All of these drivers have been in great form, with Cardy the high point’s man for the Australian Title and Giancola also qualifying well, while Halliday and Blight were on the podium in the title event, so all four drivers along with Holmes will be hungry for more success again this weekend.

Add in the very impressive Brent Vosbergen who along with fellow rookie Jason Bond returns this weekend, not to mention names like Ken MacPherson and ‘Red Hot’ Veronica McCann who have also nominated and we are set for a great show in round ten of the Racin’ Tyres and Accessories Pro Dirt Series.

See you trackside this Saturday night!