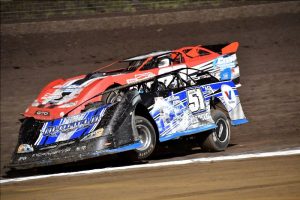 Warren Oldfield has continued the Oldfield success though as he too had three wins on the night, but of a very different nature to brother Jamie.

Jamie Oldfield was pure class as he won every race he started tonight, including two heats earlier in the evening, then set a brand new record in the nonstop twenty lap feature event.

Jamie started on pole, racing away at the drop of the green flag from second placed Brad Blake and third placed Michael Holmes.

Brad Ludlow and Jay Cardy behind the leading trio made slight contact, with Brad Ludlow forced infield, but back up front Jamie was creating a huge gap between himself and the rest of the field.

Lapped traffic proved to be no obstacle for Oldfield as he made his way comfortably through, while Cardy began to put pressure on Holmes for third in the closing laps.

All of a sudden it became a three way battle as Warren Oldfield joined in on the action, with Cardy passing Holmes on lap fifteen.

From here the order remained unchanged, the race going to flag to flag and Jamie winning by over six seconds and in the process setting a new record, bypassing the mark set by Steve Francis in 2012, recording a time of 5.31.007.

Earlier in the night Australian Champion raced to a dominant victory in the opening heat, crossing the line some seven seconds ahead of second placed Michael Holmes, but it would be his one and only event for the evening as mechanical dramas saw him sidelines for the remainder of the evening. Jamie Oldfield then claimed the other two preliminaries.

Although it was Jamie Oldfield who took out the feature, it was his brother Warren Oldfield who did enough to secure both Championships overall. Warren defeated Jay Cardy by seventy points in the Perth Motorplex Track Championship, with Michael Holmes just eight points further back in third place, with some fifty two cars competing in at least one round of the Championship.

As if these victories werenr enough, Warren then went on to win the Demo Derby to round out the Perth Motorplex season!

Stay tuned for a full season wrap up in coming days, but in the meantime, a huge congratulations to Jamie Oldfield on his feature win, Warren Oldfield on his series (and Demo Derby!) wins and to all our drivers who performed admirably across the season.

It has been an epic one!